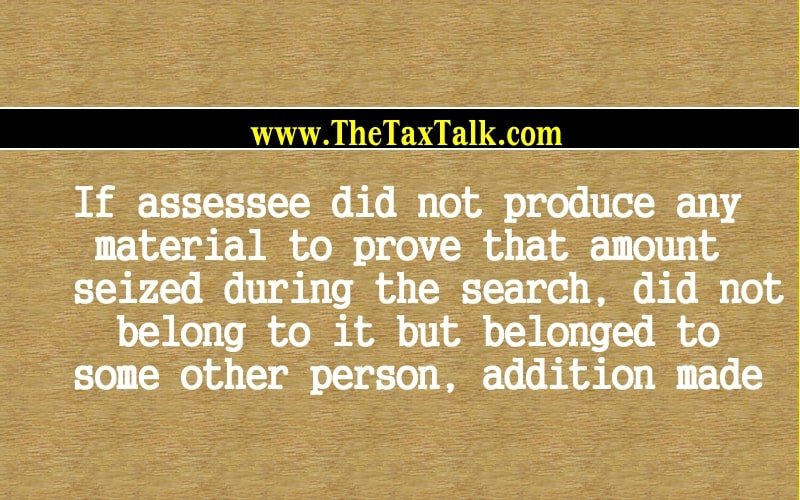 IN THE KARNATAKA HIGH COURT

This appeal under Section 260A of the Income Tax Act, 1961 (hereinafter referred to as the Act for short) has been preferred by the assessee.  The subject matter of the appeal pertains to the assessment year 2004-05. The appeal was admitted by a bench of this Court vide Order, dated 20-2-2020 on the following substantial questions of law :–

(ii) Whether in law, the tribunal was correct in ignoring that the balance sheet was audited which had reconciled the cash seized during search?

(iii) Whether in law, was it correct for the tribunal to sustain the addition even when the appellant had reconciled the difference by explaining the cash found and seized?

In so far as the cash found at the time of search, Rs. 20.03.680, the third claim is concerned, the First Appellate Authority has affirmed the finding recorded by the tribunal. The assessee was in appeal. The tribunal has recorded any finding on this aspect of the matter. Again, the operative portion of the order, states that the appeal is allowed, it cannot be construed as setting aside the order of the appellate authority as no reasons are given. Therefore, that aspect also requires to be considered by the tribunal afresh.

The bench wanted to know whether that income was offered in those 2 hands and tax had been paid thereon because in that event, the amount cannot be added again in the hands of the assessee because it will amount to double taxation. But if that is not done then addition made by the assessing officer is justified because as per the assessee’s own submissions before the assessing officer, there was negative cash balance of Rs. 26.56 Lakhs in the case of SS Tours and Travel which means that firm was having more physical cash as compared to book cash of that firm and therefore, book cash of that firm cannot be considered as explanation for the cash founding the nads of the present assessee. In reply, the learned AR of the assessee had nothing to say except reiterating that the cash found in the present case is belonging to M/s S.S.Tours and Travels.

In view of preceding analysis, the substantial questions of law framed by a bench of this court are answered against the assessee and in favour of the revenue. In the result, the appeal fails and is hereby dismissed

Tags: addition madedid not belong to it but belonged to some other personIf assessee did not produce any material to prove that amount seized during the search