Get Ready: Fast Tag data integration with the e-way bill system set to move the Business from Unorganized Zone to Organised Zone 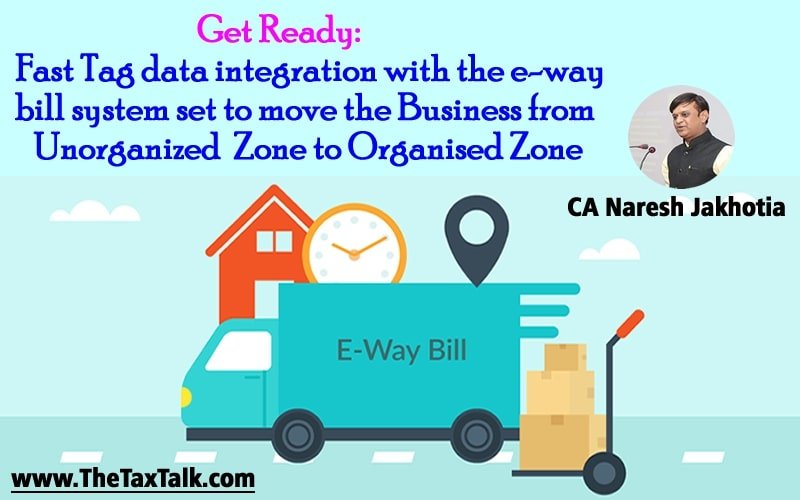 Get Ready: Fast Tag data integration with the e-way bill system set to move the Business from Unorganized Zone to Organised Zone

Who says that the unorganized market & industries cannot be regulated in India ?
Who says that sales without GST cannot be controlled?
Who says that Indian is such a vast country to be governed and regulated ?
Who says that everything in India would be person based and not system driven?
Everything is set to change.
Tax adminstration in India system is set to be better & stronger than the European & American Governance, though with a slow pace.
Entire regulatory mechanism is likely to witness sea change in the next 3 to 5 years.
It will be the Governance & not the Government that will dominate the country.
Now, the FASTag data has been integrated with the e-way bill system.
On a daily average, around 24 lakh transactions related to commercial vehicles from 826 toll plazas are  exchanged with NIC. It’s all have started working.
Introducing techno changes in the overall GST compliance framework especially integrating FASTag with e-way bills system would give infinite data to the authorities which once fed into an Autobot would help track tax evaders in real-time.
It is one More Step to Stop Fake Invoicing wherein the bills are sold and not the goods. The linking will also generate the reports wherein the goods are transported  without e way bill & e invoicing as well.
This will establish the complete 360 degree audit trail wherein e invoicing will be linked with e way bill which will be cross linked with FastTag.
Get ready to enter into the word of Technological Tax system wherein system will work and not the human being.
The above process of system driven working may finally end up with the merger of CBDT & CBIC. After merger, GST & Income Tax compliance will be simplified and the multiple data submission could be avoided.
Time for Taxpayers & Tax Professionals to visualise the future and get ready for it !!
Tags: Get Ready-made FASTag data has been integrated with the e-way bill system