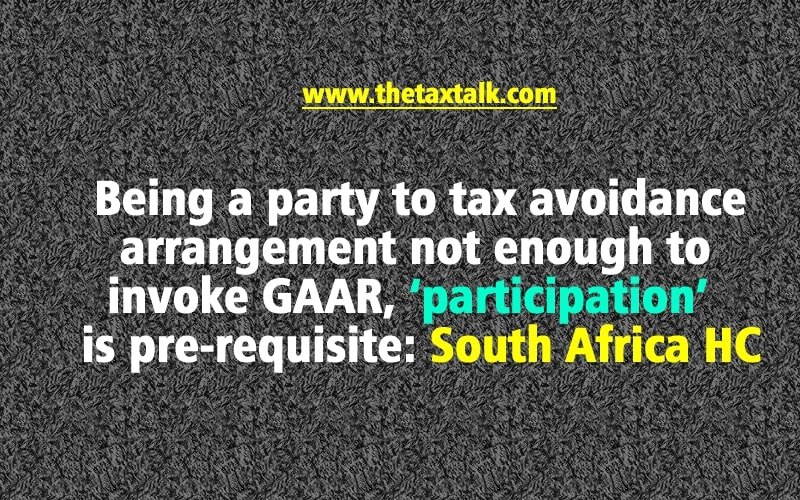 Absa Bank Ltd and its wholly-owned subsidiary Absa Towers (Pty) Ltd (ABSA) sought to review decisions of the South African Revenue Service. The origin of this case lies in a controversy about whether or not an impermissible tax avoidance arrangement was conceived to evade tax liability.

The South African Revenue Service held that ABSA had been a party to a tax avoidance scheme covered by local anti-avoidance provisions. Unravelling the series of transactions led to the view that ABSA was a party to an arrangement comprising all these transactions and that ABSA had received an impermissible tax benefit in the form of a tax-free dividend. The proper result ought to have been that interest was received by ABSA which would attract tax.

The High Court of South Africa observed that a taxpayer has to be, not merely present, but participating in the arrangement. The fact that it might be the unwitting recipient of a benefit from a share of the revenue derived from an impermissible arrangement cannot constitute “taking part” in such an arrangement.

The Court held that the premise that ABSA was a party to a tax avoidance scheme was incorrect in law because the factual premise did not establish that ABSA was a party to such arrangement nor that it had an intention to escape an anticipated tax liability nor that it received relief from tax liability as a result of acquiring preference shares in PSIC 3. Accordingly, the court allowed the appeal of ABSA.

Assessee to be allowed manual filing in case there are technical issues to e-file appeals: Madras HC

Assesse filed return of income, and assessment was completed under Section 143(3) read with Section 147. Against such assessment order assessee filed an appeal before CIT(A) in Form 35 manually within 30 days from the date of the assessment order. CIT(A) issued a notice to assessee stating that in terms of Rule 45, it is mandatory and compulsory to file the appeal only by way of e-filing.

On revenue’s appeal, Madras High Court held that there were several technical issues in the e-filing of appeals coupled with the fact that assessee and his authorized representatives were not well acquainted with the procedure for e-filing of the appeals. Thus, the benefit can be given in favor of assessee, especially when the right of appeal being a statutory right and valuable right. It should not be denied on technicalities. Thus, High Court held that ITAT had rightly allowed the appeal filed by the assessee, and accordingly appeal filed by revenue was dismissed.