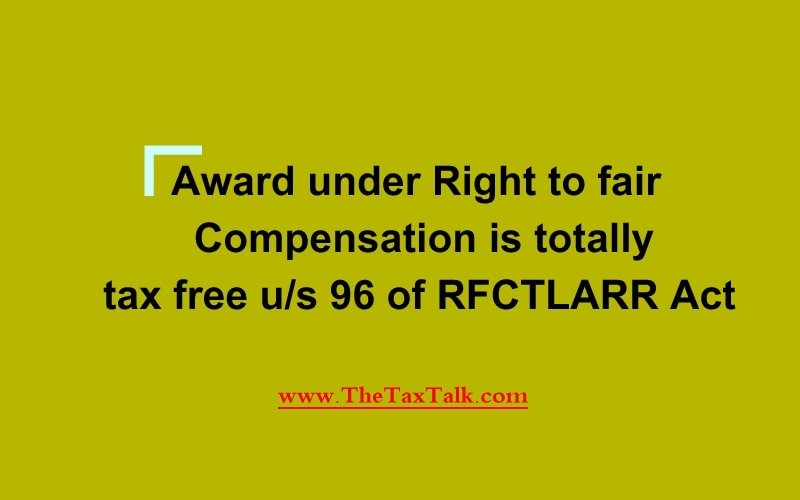 “The main intention of the section is to spare the poor farmer the  further burden of Income-tax, who has already suffered loss of livelihood, replacement, emotional trauma etc. This is clear from the concluding lines of the Section 96. It says that “no person claiming under any such award or agreement shall be liable to pay fee for a copy of the same”. The Act here envisages a poor agriculturist, for whom even paying a few rupees of copying fees, which cannot possibly exceed Rs.100/- considering the number of pages, shall be a huge economic burden.

From the above discussion, it can clearly be seen that compensation on a depreciable asset cannot be said to be covered by Section 96 of the RFCTLAAR Act.”

“7. Subsequently, the Central Board of Direct Taxes(CBDT) issued a Circular bearing No.36/2016, dated 25.10.2016, clarifying that the compensation received under an award exempted from the levy of income tax under Section 96 of the 2013 Act shall not be taxable, even if there is no specific provision for exemption under the Income Tax Act, 1961. Therefore, one set of land owners whose lands were acquired have come up with the 3rd writ petition W.P.(C)No.44382 of 2016 seeking a mandamus not to deduct tax at source, in terms of the Circular of the CBDT”.

He prays for allowing the writ petition.