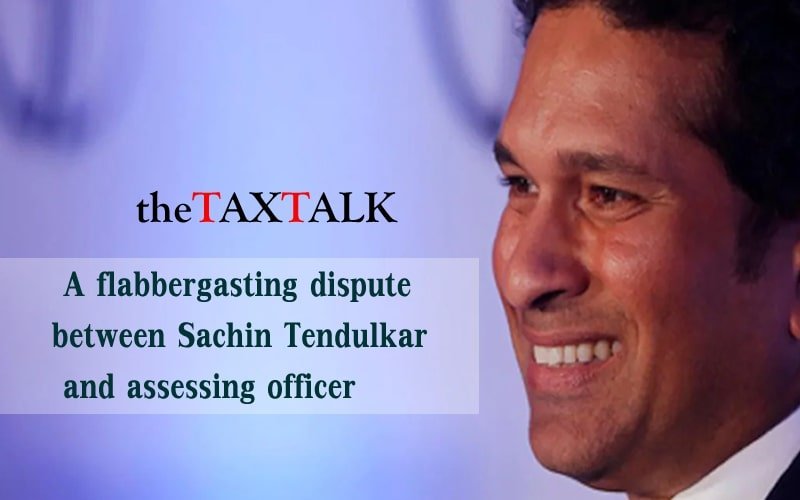 Sachin Tendulkar has been declaring himself as an actor in income tax since last 25 years.

Sachin  Tendulkar who is a former Indian cricketer, whom we have always seen as a marvelous Indian batsman, who has been the captain of Indian team, who without second thought is indeed the God of cricket.

But an interesting event transpired in 2011, where Sachin himself Interestingly pleaded that he was an actor and not a professional cricketer in the case of Sachin Tendulkar v. Assistant commissioner of income tax and adjudged by The Income Tax Appellate Tribunal.

Sachin Tendulkar declared himself as an actor in income tax and by declaring that he became eligible for tax deduction under section 80 RR of income tax act 1995, he received an amount of 59,231,211 from various advertisements and sponsorships then for ESPN Star sports, PepsiCo and Visa and subsequently he claims deduction of amount 17,769,363 as these incomes were receipts received in foreign exchange.

In order to avail deduction under the section 80RR two criterias are to be fulfilled:

Arguments on behalf of Sachin Tendulkar

Sachin Tendulkar in his defense gave an argument that he was an “actor” and a “model” by profession and he was a non-professional cricketer, therefore the income derived from playing cricket and logo money received from BCCI is an “income from other sources”.Furthermore, he said that if not an actor he should be assessed as an “artist” as he was a “public performer” and wide interpretation should be given to the same. He also kept a point that he has been receiving the deduction since 1977 so it should not be stopped even now.

The AO used the definition given in Oxford dictionary to define the professional cricketer which says:

i) He relates and belongs to the cricketing profession;

ii) He is engaged in the activity of playing cricket as a paid job rather than as an amateur. He does not lay cricket only as a hobby. It would be correct to say that playing cricket is the source of his livelihood and is therefore, his profession.

Since Sachin qualified the criteria of professional cricketer, hence his claim of being actor is wrong.

They further put a point that such sponsorship and advertisement contracts were given mainly for his name, for success and personality as a cricketer which made the public trust the brand and not for his acting skills. Hence, acting should not be accepted as his primary profession and tax deduction should not be given.

CIT too agreed with the AO’s observation and they further gave an argument that the activities like TV commercials and sponsoring products of various company for which he was paid would not be counted as subsidiary activities related to cricket profession because these activities nowhere require skills of his main profession or any expertise related to his profession as a cricketer, hence it neither can be called as “income derived by him in the exercise of his profession”.

Final decision of ITAT was that Sachin is an actor too.

The council overturned the decision of AO and CIT, and said that a person can have two professions, hence Sachin can be both cricketer and an actor/artist too. The council said that though Sachin is a cricketer but when he faces cameras and lights, he requires his own set of skills, creativity& imagination similar to an artist. He has his own set of skills and talent while acting in an advertisement.

The opposing counsel on the other hand argued that Section 80RR specifically mentions that the phrase “exercise of his profession” and “such income” means that there should be a direct nexus between the two and also the activity carried out exercise of profession should not be a mere single/incidental act but should be the main profession i.e., cricket itself.

But ITAT declared that a person can have more than one profession. ITAT declared him as an artist too and it gave judgement that he was eligible for deduction under 80RR.

Tags: A flabbergasting dispute between Sachin Tendulkar and assessing officer