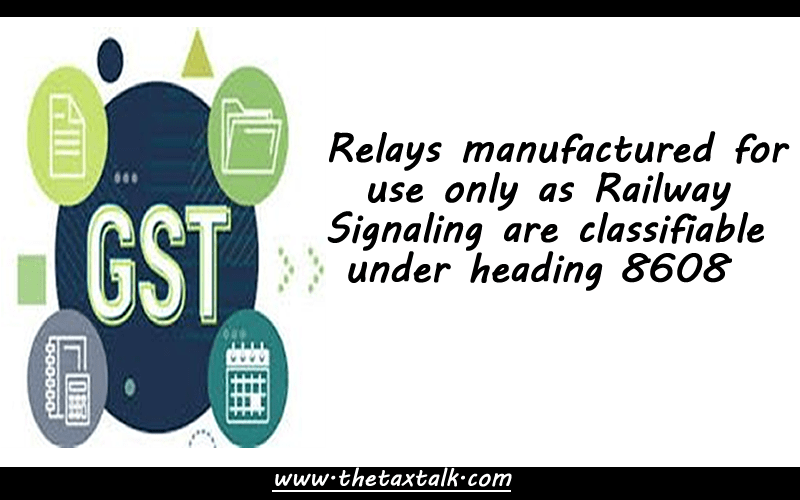 The appellant was engaged in the manufacture of “Relays” which were used as part of the Railway signaling system.

On 27-8-1993, the appellant submitted a classification list for the approval of the Assistant Collector, Central Excise.

This list provided details of the products manufactured by the appellant as Railway signaling equipment, including relays and claimed that they should be classified under sub-heading 8608 and not under 8536 in the First Schedule to the Central Excise Tariff Act.

This classification list was approved by the competent authority.

On 23-4-1996 the Central Board of Excise and Customs issued a circular indicating that ‘plug-in type relays’ merited classification under the Chapter Heading 85.36.

Thereafter, the Assistant Commissioner of Central Excise issued nine different show cause-cum-demand notices calling upon the appellant to show cause as to why the goods should not be classified under the Sub-Heading 8536.90 and why the differential duty should not be collected together with the interest and penalty.

The appellant gave reply to the show cause notices, contending that what was manufactured by them was supplied only to Railways as part of the signaling equipment and that, therefore, the show cause notices required to be dropped. However, the Assistant Commissioner passed Orders-in-original confirming the demand.

The Appellate Authority also confirmed the classification made by the Adjudicating Authority. The CESTAT also dismissed the appeal and the appellant filed appeal before the Apex Court.

The Honorable Supreme Court observed that it would be important to see description of the goods that fall under Chapter 85 and Chapter 86 with particular reference to the relevant Tariff Items.

Moreover, the goods were previously classified (before 1993) under Sub-heading 8536.90, but a revised classification list, classifying them under sub-heading 8608, submitted by the appellant, was approved by the competent Authority on 27-8-1993. After such specific approval of the classification list, it was not proper on the part of the Authorities to invoke Note 2(f) of Section XVII.

“While the exclusion under Note 2(f) may be of goods which are capable of being marketed independently as electrical machinery or equipment, for use otherwise than in or as Railway signaling equipment, those parts which are suitable for use solely or principally with an article in Chapter 86 cannot be taken to a different Chapter as the same would negate the very object of group classification,” the Supreme Court noted.

Therefore, it was held that “Relays” manufactured for use only as Railway Signaling would be classifiable under heading 8608 and order would be liable to be set aside.