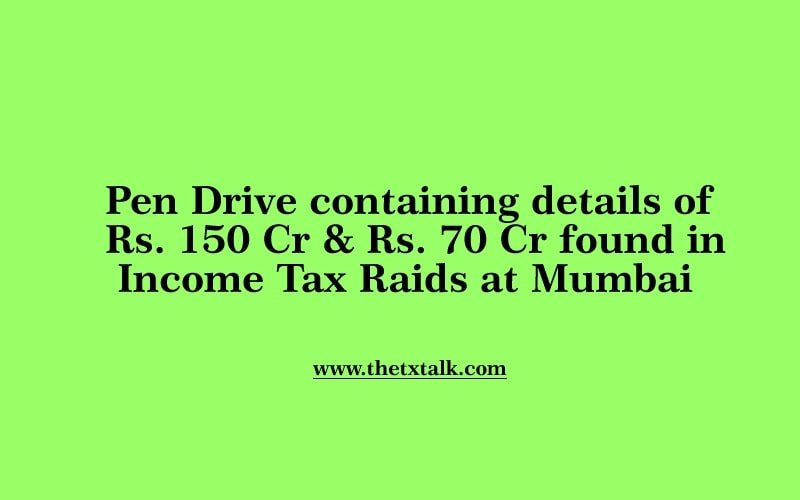 The Income Tax Department carried out searches on 17.03.2021 in the case of a prominent builder and developer group based in Mumbai. Searches were also conducted in the case of dealers engaged in the business of trading of mobiles accessories. In all, 29 premises located in Mumbai were covered under search operation, while 14 premises were covered under survey action.

The real estate group is developing a commercial Mall, having 950 units exclusively for the mobile accessories business. Of these, about 905 of the units have been sold starting from 2017 till date. The evidence stored in a pen drive found in the searched premises revealed that the builder group has taken an amount of Rs. 150 crore as on-money receipts over and above the agreement value, which is not accounted for in the books of accounts on sale of such units. Further, similar evidence of on-money amounting to Rs. 70 crore has been found in the pen drive pertaining to a residential-cum-commercial project. Cash amounting to Rs. 5.50 crore has been found and seized from various premises of this group. The receipts of on-money for sale of shops/flats by the builder in various projects recorded in digital form have been seized.

In respect of the dealers engaged in the business of mobile accessories, various incriminating evidence has been found pertaining to out-of-books sales. The group imports goods from China and sells these goods to various parties all over India. The imports are under invoiced and payments are made through hawala channels. 13 secret godowns containing unaccounted stock have been discovered, wherein the stock is being inventoried and valuation is under progress.

Further, evidence of unaccounted investments in properties by the said dealers amounting to Rs. 40.5 crore has been detected. Out of this, unaccounted investments worth Rs. 21 crore are against the purchase of units in the said commercial Mall. Four undisclosed bank accounts in the names of employees have also been detected, which are used to collect the sale proceeds from the retail vendors of the groups. The total deposits in the bank accounts amount to Rs. 80 crore.

This operation has revealed that the entire sector of trading in mobile accessories is largely unaccounted. The main components are imported from China through Mumbai and Chennai ports. Search has revealed that the dealers are undervaluing the sales and purchases in a major way. The transactions with Chinese counterparts take place through the We-Chat app. The Department has recovered the We-chat messages using forensics. The information pieces are being verified and collated to extract information regarding the quantum and cost of Chinese imports.

Unaccounted cash of Rs. 5.89 crore has been seized, so far, in this operation. The searches, as yet, have resulted in the detection of undisclosed income of around Rs. 270 crore. Further investigations and the exercise of valuation of unaccounted stock are in progress.