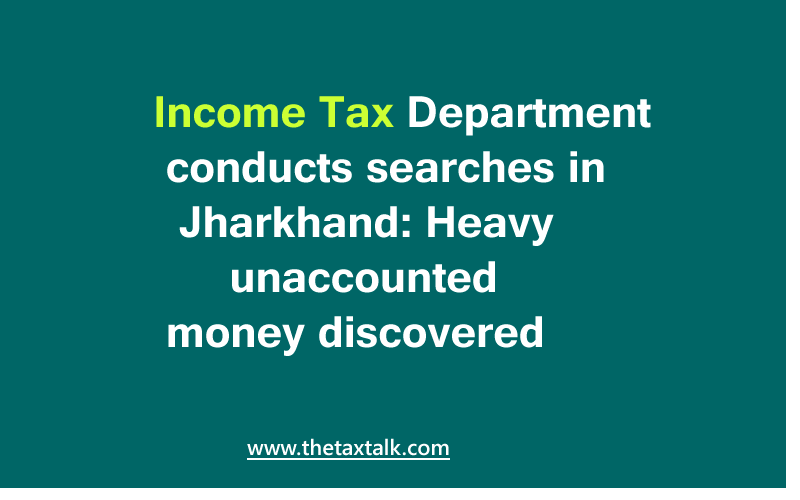 The Income Tax Department carried out searches on a closely-held Group of Jharkhand on 17.03.2021 and concluded the same on 20.03.2021. The Group is engaged in manufacturing and trading of Sponge Iron, MS Ingots, MS Rods, and TMT bars and has dealerships of petrol pumps. Search and survey was carried out at more than 20 premises.

The Group was indulging in manufacture and sale outside the books and was using an extensive network of shell companies to plough back unaccounted income. Preliminary findings include the sale of unaccounted production of Rs. 185 crore. Digital media containing details of such unaccounted transactions has been recovered and analysed. Accounts of actual production details which are not recorded in regular books have been recovered.

The products of this Group are used in building construction and other infrastructure projects, and unaccounted production is sold in cash in eastern India. The cash generated is being ploughed back into the Group in the form of share capital and unsecured loans from Kolkata based shell companies. The money is also invested in the purchase of properties and expensive personal items.

Seized documents indicate that the unaccounted income of the Group amounting to about Rs. 100 crore was ploughed back in the form of share capital at very high premiums through Kolkata based shell companies. The original share certificates issued to these shell companies were also found in the company’s office premises.  Investigations reveal that the so called shareholders do not exist.

The Group has also obtained unsecured loans of about Rs.25 crore from Kolkata-based shell companies, clearly indicating the ploughing back of its own unaccounted income. The Group has obtained bogus commodity profit entries amounting to Rs. 30 crore.

An entry provider and a freight forwarder were also searched. These persons were arranging entries through shell companies. Documents indicating such unaccounted entries have been found during search, further establishing the nature of unaccounted transactions and entries taken by the Group.

The search has revealed that the Group was actively engaged in the generation of unaccounted income in cash and introducing the same in the Group as equity and loans and making investments in real estate. Unaccounted cash of Rs. 3.07 crore was seized while unaccounted bullion and jewellery of Rs 1.28 crore was seized during the search.