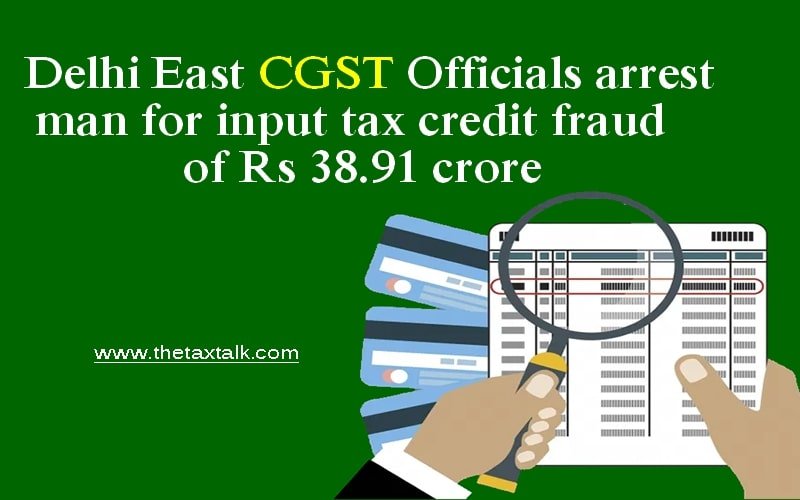 In the ongoing drive to counter the menace of fake billing operators, information from analytics tool NETRA (Network Exploration Tool for Revenue Augmentation), was developed by the officers of Central Goods and Service Tax (CGST) Commissionerate, Delhi East to unearth a network of fictitious firms used to generate and pass on fake Input Tax Credit (ITC) of Goods and Service Tax (GST).

Investigation revealed that the multilayered network was being operated by one Shri Nihaluddin who has confessed to having created a fake firm in his own name and also arranging ITC from 38 other fictitious firms on commission basis to pass on fake Input Tax Credit (ITC) to multiple beneficiaries. The investigation has so far established the issuance of fake bills of Rs 216.06 crore involving fake Input Tax Credit (ITC) of Rs. 38.91 crore, which is expected to increase as the investigation progresses.

The offence committed by the accused Shri Nihaluddin is covered under Section 132(1)(b)  of the CGST Act, 2017 which is cognizable and non-bailable offences as per the provision of Section 132(5) and punishable under clause (i) of sub section 1 of Section 132 of the Act ibid. Accordingly, Shri Nihaluddin was arrested under Section 69(1) of the CGST Act, 2017 and produced before the Duty Magistrate on 01.03.2021 who remanded him to judicial custody of 14 days till 15.03.2021. Further investigation in the case is underway.

It is pertinent to mention here that since the inception of GST Central Tax, Delhi Zone has made 28 arrests in various cases involving GST evasion amounting of more than Rs. 4058.86 crore.