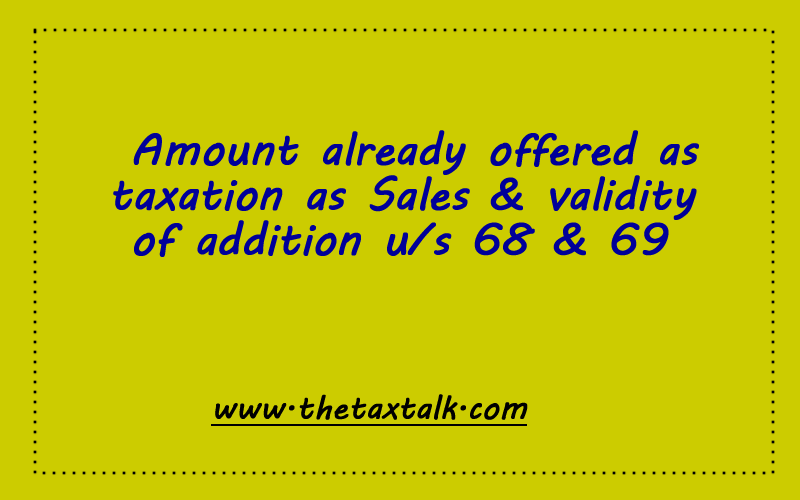 Delhi High Court in the case of PCIT Vs Singhal Exim Pvt. Ltd [Appeal Number: ITA 228/2020, order Dated 22/02/2021] has rendered a judgment which will be beneficial for lot of taxpayers, especially in whose case addition is done for deposits in the bank account during demonetisation period.

Here is the copy of the Complete Order:

“A. Whether the findings of the ITAT are vitiated in law by reason of it having ignored relevant and material facts before it and in placing reliance on paper work and documentation?

“11. The Assessing Officer has doubted the genuineness of sales mainly on two grounds – (i) the buyer parties were not found available at the address given by them and (ii) they made most of the payment in cash for the goods purchased by them. However, we find that in the documents of custom authorities giving approval of high sea sales agreement, the name and address of the buyer of goods is mentioned and it is the same address which is given by the Assessee to the income tax authorities. Therefore, it cannot be stated that such party was not available at the time when the Assessee made the sales.

Moreover, all the buyers of goods from high sea sales have importer exporter code. Copy of importer exporter code of all the buyers is placed in the paper book and we find that this importer exporter code also gives the name and address of the parties to whom importer exporter code is given, its phone number, e-mail address, date of establishment banker details, name of the directors etc. That the delivery of goods is taken from the custom authorities by those buyers and not the Assessee. In the document for export clearance, the name of those buyers is mentioned as importer of the goods and not the Assessee. That the return of notices issued under Section 133(6) unserved by the postal authorities is certainly a ground for raising suspicion with regard to identity of the parties. However, it is not sufficient to reach to the conclusion that sales to those parties are not genuine. In fact the documentary evidences produced by the Assessee i.e., approval of high sea sales by custom authorities and clearance of goods from customs after payment of import duty by the buyers on high sea sales basis proves the genuineness of sales beyond doubt.”

“12. Coming to the cash payment of sale consideration, we are of the opinion that it certainly raises the doubt but again, when there are documentary evidences from the government agencies like custom authorities, the genuineness of sales cannot be doubted. Moreover, at the relevant time, there was no law which prohibited receipt of sale consideration in cash.”

Tags: Addition u/s 69 OR 68 is not proper if amount is already offered for taxation as salesSales and section 68 & 69