What are gains of all India Protest and Way forward: WMTPA 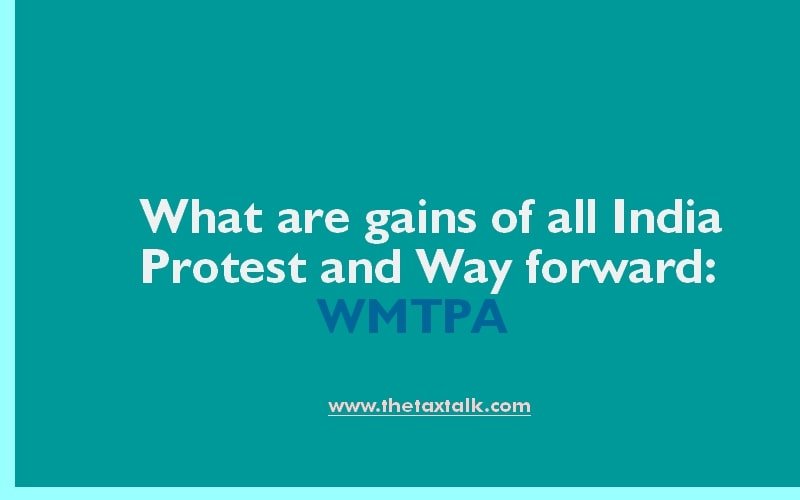 What are gains of all India Protest and Way forward: WMTPA

Call for all India protest given by WMTPA of Pune, Maharashtra received wide spread response from all over India. (Sadly not from most metropolitan cities).  Main reason for spontaneous support was that the difficulties of thousands of silent tax professionals were not reaching the executive or were not found worthy of consideration. But the discontent was brewing for quite long time. Tax professionals were under tremendous stress for last over three years and the glass of agonies had filled to the brim. Initially many stalwarts expressed their apprehension that it will serve no purpose. Some questioned whether we have right to protest. Some said that it is taxpayer’s problem, why should we protest.  We all persisted. We said जो डर गया वो मर गया. We exercised our constitutional right and did our duty as educated citizen to raise voice against unjust law. Protest demonstrations were held peacefully and in dignified manner on 29th January 2021. It was historic moment. We congratulate all those who participated, collaborated and also sympathized with us.

Looking back let us analyse what are gains of protest.

1) We realised that there should be a common platform on all India Basis.

2) We could effectively convey difficulties and problems of  tax professional.

3) Many Members of Parliament and Ministers became aware of widespread displeasure about GST implementation and took the matter with Hon. Finance Minister.

4) Many trade associations became aware about the fact that ultimately the cost of non- compliance, defective compliance is to be borne by them and it is also in their interest to raise their voices against excessive penalties.

Now apparently because of all India protest it seems that Government at highest level has taken note of the difficulties. The Hon. Finance Minister has also conveyed to us the department’s concerns, constraints and need to curb the tax evasion.  After meeting with  Honorable Finance Minister held at New Delhi we realise and appreciate that Government is eager and sincere in making GST really a Good and Simple Tax. However the road to simplicity is rough. There is always fear of sabotage.  We feel there is need for further dialogue and continuous efforts to find out ways to reduce the compliance burden without loss of revenue.  Never stop or loose heart till we reach our goal.

During protest WMTPA had prepared 76 point common representation We appreciate all our points will not be accepted. But we should now focus on, strive for reliefs from Government as mentioned below. All associations who participated and also who could not, may send their representation to Finance Minister and MPs by making suitable changes, additions etc.  as they deem fit and proper.

2)  Restriction on Input tax credit:  As per Sec 17(5) there are many items and circumstances in which though they are allowable as business expenditure under Income Tax Act (which decides the Correct Income) are not eligible for credit under GST without any rational for the same.  It increases the cost of doing business and also against the policy of ease of doing business. Two different treatment by two different tax laws governed by Central Govt does not make any sense.

If all Outward Supplies are made taxable, there is no logic or reason for not allowing Input tax credits of all legitimate inputs/input services which are debited to P&L Account as well as capital goods. Under Maharashtra VAT there was such provision.

3) Limit of 180 days be removed: The payment terms are decided by parties. Many times terms of payment exceeds the limit of 180 days. In such case the ITC is required to be reversed and added to outward tax. And again when payment is made ITC is required to be reclaimed. This exercise does not increase the tax revenue but puts added compliance cost as well as blocking of capital. If there are large number of transactions then monitoring it is challenging job. When the Government has already received the tax it is unnecessary exercise. To say that, those who delay the principal amount will pay it because they have to reverse ITC for a while is wishful thinking and not reality. The provision has not given any helping hand to msme sector.

Calculation of proportionate ITC for tax free/ taxable turnover on monthly basis is too cumbersome and again matching it with annual percentage is very difficult task. The gain is minimum but cost of compliance is more. It is susceptible to multiple mistakes which carries cost to business.

Suggestion: The calculation shall be made on yearly basis at the end of the year.

5) Job work intimation: Intimation of goods sent for job work and received back is almost impossible to comply for small and medium scale tax payers.

Suggestion:  The provision should be removed

6) Late Fee: There are large number of small tax payers whose net tax liability is either nil or very small. They have no employees or very few employees and hence many times fail to meet the due date. Fund crunch is every day affair for them. Late fee is prohibitively high for them. They deserve compassion and relief.

7) Annual Return to correct all mistakes: Rectification of mistakes is not allowed. Practically books are finalised after the end of the year mostly at the time of income tax return filing. There are certain mistakes committed by supplier which adversely affect tax payable.  If the dealer finds out any mistakes at the time of finalisation of accounts, time to correct his mistakes is over. Then he has to maintain various reconciliation statements. This results in cascading effect on   year turnover. This becomes an endless exercise and never gives real picture.

Suggestion: The annual return shall be such that it completes the reconciliation of the year and dealer should be allowed to correct all his mistakes in the Annual return which will override all the monthly returns filed for the year.

8) Amnesty: During the meeting it was explained to the representatives of WMTPA that technically it is not possible to allow revision or rectification. Without questioning veracity of the claim it is suggested that:

Considering the fact that in most other tax laws revision of return is permissible the tax payers were confident and expecting that the revision will be allowed some day or other. During first initial years most tax payers have inadvertently made some mistake. Clerical mistakes while uploading various forms have resulted into additional financial burden. Though they are genuine mistakes the cost by way of not getting credit and other cost are very high. It is therefore suggested and necessary that an amnesty be given to rectify and all mistakes so far.

If all above suggestions are accepted then compliance time, effort and cost will come down significantly without any loss of revenue. GST may not become simple but will become bearable and it will be step in the direction of ease of doing business.