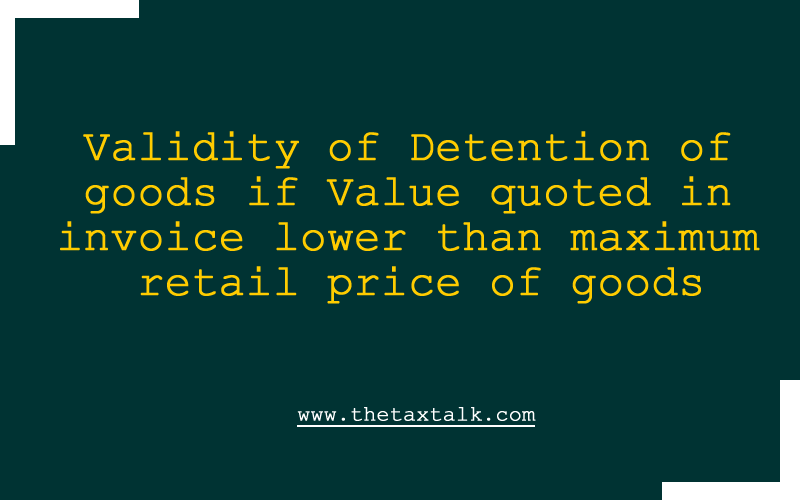 The challenge in the Writ Petition is against Ext.P2 notice by which, goods belonging to the petitioner were detained in a parcel godown, on the ground that the value quoted in the invoice that accompanied the goods was low when compared to the Maximum Retail Price (MRP) of the goods. There is a further averment therein that the HSN code of the goods was wrongly entered. It is the contention of the learned counsel for the petitioner that the reasons given in Ext.P2 order of detention do not justify a detention of the goods under section 129 or under section 130, and therefore, a direction ought to be issued to the respondents to immediately release the goods belonging to the petitioner.

On a consideration of the facts and circumstances of the case as also the submissions made across the Bar, I find that none of the reasons stated in Ext.P2 order justify detention of the goods. There is no provision under the GST Act which mandates that the goods shall not be sold at prices below the MRP declared thereon. Further, there is nothing in Ext.P2 order that shows that, on account of the alleged wrong classification of the goods there was any difference in the rate of tax that was adopted by the assessee. In my view when the statutory scheme of the GST Act is such as to facilitate a free movement of goods, after self assessment by the assessees concerned, the respondents cannot resort to an arbitrary and statutorily unwarranted detention of goods in the course of transportation. Such action on the part of department officers can erode public confidence in the system of tax administration in our country and, as a consequence, the country’s economy itself. Under such circumstances, I quash Ext.P2 detention order and direct the respondents to forthwith release the goods belonging to the petitioner on the petitioner producing a copy of this judgment before the said authority. I also direct the Commissioner, Kerala State Taxes Department, Thiruvananthapuram to issue suitable instructions to the field formations so that such unwarranted detentions are not resorted to in future. The Registry shall communicate a copy of this judgment to the Commissioner, Kerala State Taxes Department, Thiruvananthapuram for necessary action.