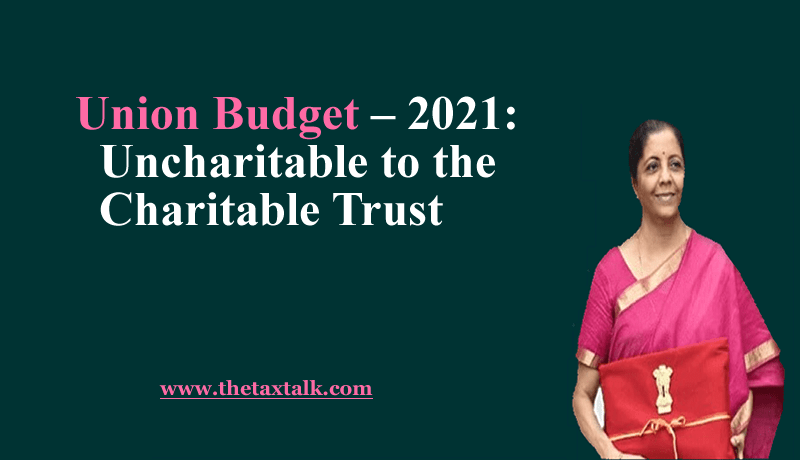 Let us know more about all three adverse amendments proposed in the Union Budget – 2021.

Trusts registered u/s 12AB are not allowed to accumulate more than 15% of their income (or in specific cases, accumulate to specific purpose up to 5 years) from the voluntary contributions other than corpus donations referred above in terms of Section 1191)(b) read with clause (2) of explanation-1 to Section 11.

As far as corpus donation is concerned, presently corpus donations received by trusts, institutions funds etc. is subject to the tax treatment as under:

Though corpus donation is exempt, Trusts were eligible to claim it as part of the mandatory 85% application from income other than such corpus. Such treatment was effectively resulting in double deduction in the hands of the trusts. In order to ensure that there is no double claim by charitable institution while calculating application or accumulation, following amendments are proposed by way of insertion of sub clause(a) to explanation 2 to section 10(23C) and sub clause (a) or clause (b) of section 11:

Treatment of Expenditure incurred out of Loans & borrowed        funds:

There are instances where charitable activity is carried out by borrowed funds. At the first instance, when the expenses were incurred the benefit of application of income is taken by the trust. Few trusts were also taking further deduction at the time of repayment of the loan. Effectively, few trusts were claiming dual deduction in such cases. The matter was full of litigation and disputes which is now put to an end by Budget – 2021 wherein amendments are proposed by way of insertion of sub clause(b) to explanation 2 to section 10(23C) and sub clause (ii) to explanation 4 to section 11 for the purposes of determining the amount of application under clause (a) or clause (b) of section 11 which provides as under:

The Supreme Court & Various courts have already ruled that the trusts are eligible to set off excess application of earlier years against income of subsequent years. The issue already settled by the judiciary has been nullified by the Union Budget 2021 by introducing new explanation -2 to Section 10(23C) and explanation – 5 to Section 11 as under:

There is one beneficial amendment as far as trusts are concerned. The prescribed limit for exemption to certain entities U/S 10(23C)(iiiad) & (iiiae) has been enhanced. Section 10(23C)(iiiad) and (iiiae) provides for exemption for the income received by any person on behalf of university or educational institution/ hospital as the case may be, as referred in the relevant clause . The exemption is available to the referred entities if their annual receipt does not exceed the prescribed amount of Rs.1 Cr. It is proposed to increase the prescribed limit from Rs.1CR. to Rs. 5Cr.