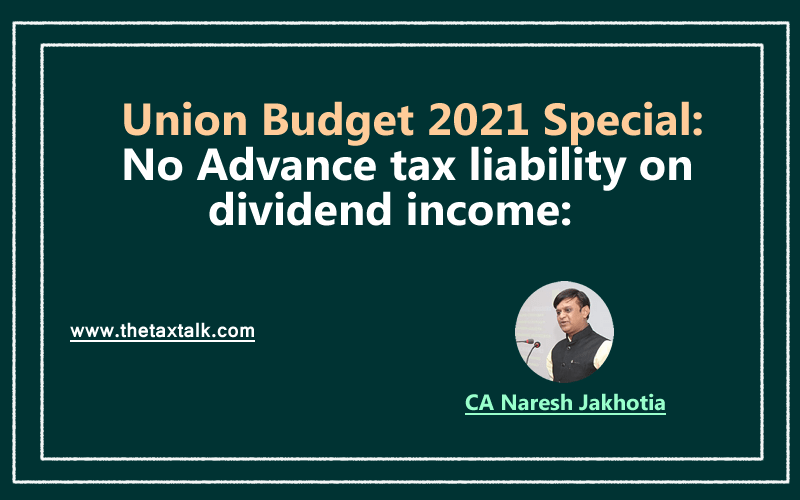 Union Budget 2021 has incorporated a provision which is sure to give the benefit to a lot of taxpayers. It has proposed to relax the provision as contained in Section 234 C which provides for interest on non-payment of advance tax in 4 installments.

It is now proposed to provide that no Interest on Dividend income along with capital gains will be levied if the shortfall in the advance tax payments and tax due has been paid in the subsequent advance tax installments.

It may be noted that Section 234 C of the Act provides for payment of interest by an assessee who fails to pay on time the advance tax installments as per section 208 of the Act.

The assessee is liable to pay a simple interest at the rate of 1% per month for a period of three months on the amount of shortfall calculated with respect to the due dates for advance tax installments. For the first 3 quarters, interest is payable for 3 months even if the delay is just for one day.

Presently, few exclusions are already there as the first proviso of the sub section (1) provides for the relaxation that if the shortfall in the advance tax installment or the failure to pay the same on time is on account of the income listed therein, no interest under section 234C shall be charged provided the assessee has paid full tax in subsequent advance tax installments. These exclusions are: –

(a) The amount of capital gains; or

(c) Income under the head “Profits and gains of business or profession” in cases where the income accrues or arises under the said head for the first time; or

Logic behind above exclusions is to of course to save the taxpayers from payment of interest under section 234C of the Act in cases where accurate determination of advance tax liability is not possible due to the very nature of the income.

The relevant part of the of the Finance Bill 2021 is produced hereunder:

Clause 53 of the Bill seeks to amend section 234C of the Income-tax Act relating to interest for deferment of advance tax.

The first proviso to sub-section (1) of the said section provides for categories of incomes for which there will be no charge of interest under the said section, in the event of failure to estimate such incomes resulting in a shortfall in the advance tax payments and tax due has been paid in the subsequent advance tax installments.

It is proposed to substitute clause (d) of the first proviso to said sub-section to include dividend income along with capital gains therein, so as to provide that the interest under the said section shall not be applicable to any shortfall in the payment of the tax due on the returned income where such shortfall is on account of under-estimate or failure to estimate dividend.

It is further proposed to insert Explanation 2 in the said sub-section to define the term “dividend”.

These amendments will take effect from lst April, 2021 and will, accordingly, apply in relation to the assessment year 2021-2022 and subsequent assessment years.