Statement recorded during survey u/s. 133A cannot be the sole basis on which adverse inference can be drawn against the assessee. 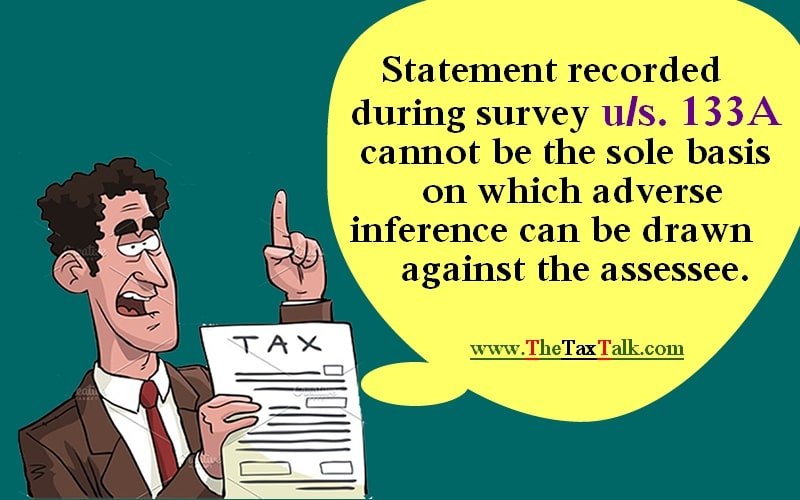 Statement recorded during survey u/s. 133A cannot be the sole basis on which adverse inference can be drawn against the assessee.

PODDAR RUBBER INDUSTRIES vs. DEPUTY COMMISSIONER OF INCOME TAX
(2021) 61 CCH 0039 GauTrib
Short Overview:
Loss on account of transaction in Stock Exchange of F&O
Assessee has debited loss on account of transaction in Stock Exchange of F&O
According to AO, transaction was made through one broker namely KSPL and as per information available from one of directors H of M/s. KSPL as admitted in his statement recorded u/s. 133A this company M/s. KSPL has indulged in providing bogus Long Term Capital Gain
Assessee preferred an appeal before CIT(A) who confirmed same
Held, Assessee has traded in F&O through recognized stock exchanges of BSE & NSE which admittedly happens through electronic platform; and when transactions are finalized payments are made through banking channel/online
All supporting documents to prove F&O transactions were produced before lower authorities which has been discarded by them without assigning any reason
Other than suspicion which has been raised by AO on strength of purported statement of H (director of M/s. KSPL) as well as that of M, accountant of M/s. KSPL that too of selected extracts, there are no other material against assessee
On a careful reading of statement of H and M it is discerned that they have not made any allegation against assessee’s involvement in any bogus transactions
AO has neither summoned these persons (H and M) and himself questioned them—Assessee had discharged its primary onus in proving transaction on F&O by producing corroborating evidence before AO/CIT(A)—Both authorities could not find any infirmity on these documents
Rather than doing so, he simply relied upon statements of both these persons during survey of a third party and without any incriminating oral statements/documentary evidence or material against assessee or F&O transactions carried out by assessee, based on suspicion only has drawn adverse inference/finding against assessee which action of both AO as well as CIT(A) cannot be countenanced
Statement recorded during survey u/s. 133A cannot be sole basis on which adverse inference can be drawn against assessee
Moreover, assessee has been kept in dark and has not been given entire copy of statement of H as well as that of M; and no opportunity has been granted to assessee to cross examine H as well as that of M
Therefore, veracity of statements could not be tested, so their statement cannot be relied
Based on supporting evidence produced by assessee to validate its transaction of F&O in recognized stock exchange, loss suffered in said transaction has to be allowed
Assessee’s appeal allowed.
Tags: PODDAR RUBBER INDUSTRIES vs. DEPUTY COMMISSIONER OF INCOME TAXsurvey u/s. 133A