Noting in a diary couldn’t be ground for sec. 69A additions unless same is supported by corroborative evidence 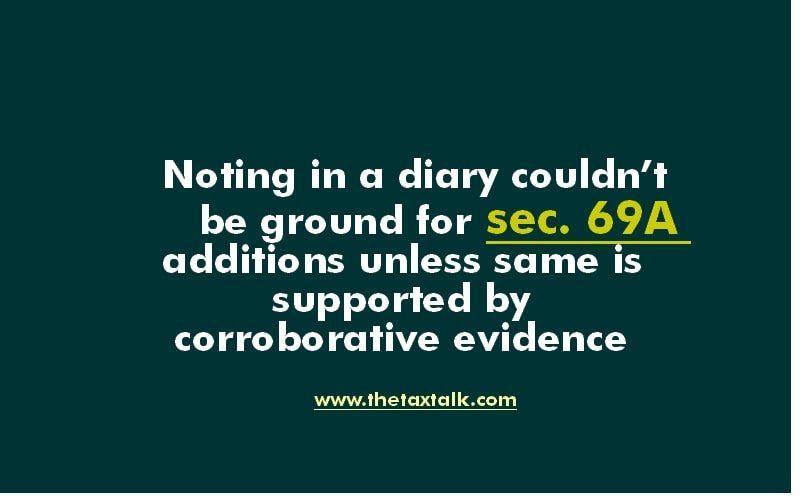 Noting in a diary couldn’t be ground for sec. 69A additions unless same is supported by corroborative evidence

During a search conducted at assessee’s premises, a diary was found.
Such diary had noting which showed an amount received as consideration for the transfer of property by assessee.
Consideration recorded in such diary was in excess of the amount shown in the sale deed.
Assessee explained that the diary does not belong to her and noting therein was also not in her handwriting.
However, Assessing Officer (AO) did not accept assessee’s explanation on the ground that in earlier year assessee submitted that such diary was maintained by her husband, being head of the family, who was controlling all the financial matter of the family.
Further, it was observed by AO that assessee’s husband was the owner of the ½ share of such property and therefore the contention of the assessee that she has nothing to do with the contents of the diary, was unacceptable.
AO, while making the addition, also relied upon section 292C on the reasons that in terms of such section the documents found in the possession of persons during the course of search are to be taken as belonging to them and contents of such documents are true.
CIT(A) upheld the order passed by AO.
On further appeal, ITAT held that the diary seized during the search operation, without corroboration, have no authenticity and therefore cannot be relied upon.
Even entry recorded in the diary in respect of the amount of sale was not confirmed from the buyers of the property.
Without such confirmation, the question of any assumption or belief that the entry belongs to the assessee did not arise.
Hence entry found in the diary without any corroborative evidence, cannot be made the basis of addition.