Mere suspicion is no ground for exercise of power u/s 263. 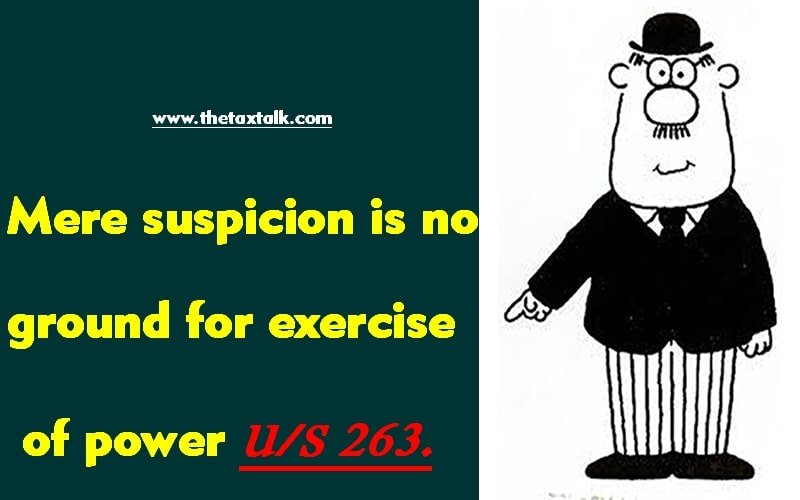 Mere suspicion is no ground for exercise of power u/s 263.

NITSON & AMITSU PVT. LTD. vs. ASSISTANT COMMISSIONER OF INCOME TAX
(2021) 61 CCH 0023 KolTrib
R—Order erroneous and prejudicial to interest of revenue
Assessee a company in business of trading as well as construction filed its return of income
AO passed an order u/ s 143(3)
Pr. CIT issued show cause notice u/s 263(1) proposing to revise assessment order holding that since its inception, assessee has been following percentage completion method as per AS-7 for construction business, AS-9 for its trading activities and AS-2 for valuation of stock
Fact of matter is that AS-7 principle does not detail variations in account of closing work-in progress and opening work-in-progress in statement of trading and construction account
Hence, whether in standards adopted, assessee is actually depicting proper disclosures of contract revenue and thereby proper income is what is germane to issue
Impugned assessment order passed by A.O. was held to be erroneous in so far as it is prejudicial to interests of revenue
Held, Assessee is following percentage completion method of accounting—In this method, at best dispute can be year of taxation of a particular receipt as income but not total escapement of income—Pr. CIT is wrong in his understanding of accounting of opening work-in-progress and closing work-in-progress
Assessee maintains project-wise accounts
Assessee is determining turnover to be disclosed in a year by following AS-7—revenues are recognised proportionately—Order-wise, Project-wise, Year-wise details are given in a scientific manner
Pr. CIT has not pointed out as to where error has occurred
Pr. CIT had a suspicion that income is not accounted for correctly
Mere suspicion is no ground for exercise of power u/s 263
No verification or examination of audited accounts is done by Pr. CIT
As he has suspicion, he simply set aside matter to file of AO for fresh adjudication—This is not permitted in law
Pr. CIT should have conducted enquiries and should have verified accounts and other documents and details himself and pointed out specifically as to where an error has occurred which is prejudicial to interest of Revenue and which in his opinion would result in assessee being not assessed at correct amount of income and only after such enquiries, examination and verification he can come to a conclusion that there is an error insofar as it is prejudicial to interest of Revenue
Such an order is bad in law
Assessee’s appeal allowed.
Tags: (2021) 61 CCH 0023 KolTribNITSON & AMITSU PVT. LTD. vs. ASSISTANT COMMISSIONER OF INCOME TAX