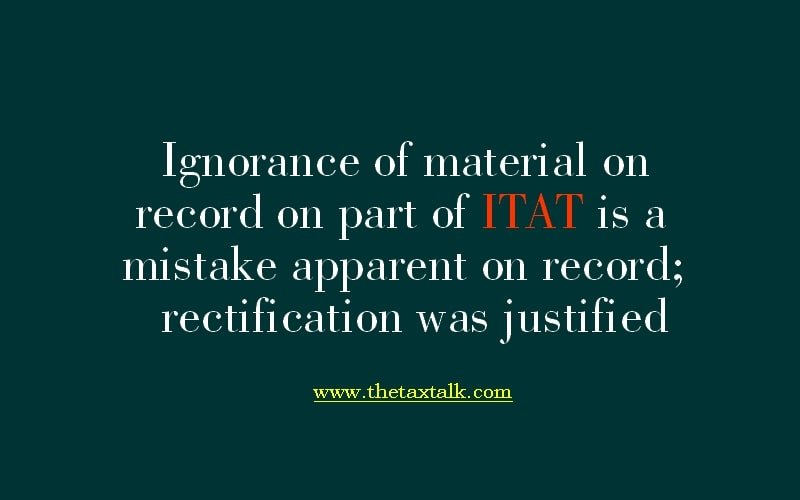 CIT v. Shree Ganesh Ventures – [2021] 124 taxmann.com 199 (Madras)
Short Overview:
Assessee purchased scraps from two sundry sellers. Assessing Officer (AO) sent notice under section 133(6) to one of these sellers which was returned unserved. Further, another seller denied having any dealings with the assessee.
AO held that the identity and genuineness of sellers were not established and made additions under section 68.
On appeal, Tribunal also upheld the order of AO.
The assessee moved miscellaneous application pointing out that there was material on record including PAN, Invoices from those creditors, etc. but, the learned Tribunal failed to take note of the same while passing the order.
Thus, the order deserved to be revoked, reviewed and rectified under section 254.
The Tribunal accepted the mistake on its part and recalled the order.
It granted the requisite relief to the assessee by setting aside the additions under section 68. Aggrieved-revenue filed an appeal before the High Court by contending that the tribunal was not justified in reviewing his order.
It was contended by the High Court that the material produced by the assessee was never before the original Assessing Authority or before the First Appellate Authority.
Thus, the Tribunal had erred in taking the same into account.
The Madras High Court held that the powers of assessment vested with all the three Authorities including the Appellate Authorities are co-extensive in law and there is no prohibition in law in producing the relevant materials before the permission of the second Appellate Authority viz., the Tribunal.
Since the Tribunal found that the said material was already on the record, when it passed the order, there was no doubt that the material was produced before the tribunal in a doubtful manner.
Concerning the scope of section 254, ignoring the material already on record on the part of the learned Tribunal was a mistake apparent on the face of the record. Thus, the learned Tribunal had rightly recalled its order and rectified the mistake.