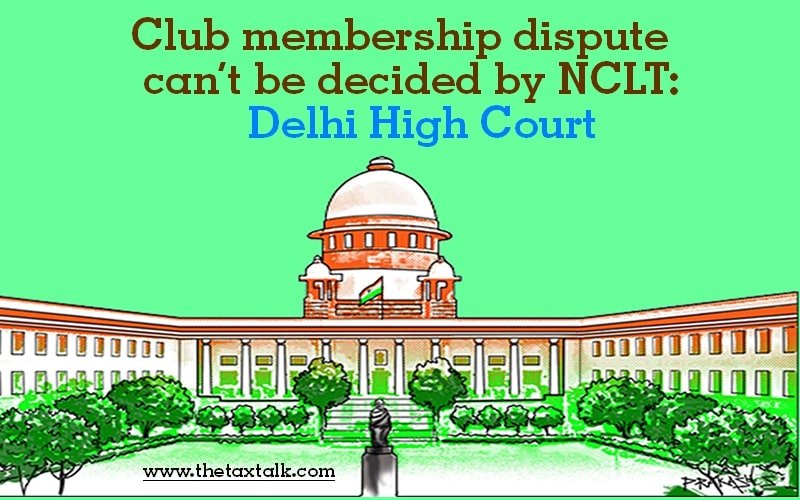 The Delhi High Court in the Naresh Dayal v. Delhi Gymkhana Club Limited case held that the dispute concerning the classification of members on the basis of a pre-determined rule was liable to be adjudicated by the Court itself and not by the National Company Law Tribunal (NCLT).
Brief facts
The plaintiffs filed a suit in the Delhi High Court against Gymkhana Club’s policy of extending the facility of issuing Green Cards only to those children of members who had enjoyed facilities of Club while being minors, and denying the same to others.
As per the rules, the facilities of the Club can be enjoyed by the spouse and dependent members. Members’ children below the age of 21 years are considered as dependent members. Children up to the age of 13 years can utilize the facilities of the Club when accompanied by the parents and between 13 to 21 years, independently.
Children of members attaining the age of 21 years may continue to use the facilities of the Club after applying for permanent membership in which case they are issued a Green Cards. The facility of the Green Card, however, was available only to those children who had enjoyed the facilities of Club while being minors. It was denied to those children who did not enjoy the facilities of the Club as minors.
This differential treatment was challenged by the plaintiffs in the High Court.
According to the plaintiffs, denying Green Cards to a class of members amounted to acting inequitably. It was also alleged that the scheme was designed to benefit only a section of permanent members.
The plaintiffs prayed to the court for a decree declaring that the facility of extending Green Cards be extended to children of all permanent members irrespective of whether they have used the club facilities as a minor or not.
After completion of the pleadings, the issue of maintainability of the petition came up for adjudication.
The issue was: “Whether this Court does not have jurisdiction to entertain the present suit in view of the provisions of the Companies Act, 2013 and the jurisdiction of the NCLT?”
High Court
The High Court held that under Section 242 of the Companies Act, the NCLT has powers to deal with the issue of winding up of a company.
“However, in the present suit the plaintiffs do not claim winding up of the defendant No. 1 Club which is a company by guarantee…the cause of action pleaded by the plaintiff in this suit is the manner in which Article 13(3)(b) of the Articles of Association of the defendant company is being interpreted thereby creating irrational and illegal classification.
“NCLT not being empowered to determine the said cause of action, this Court is of the opinion that the plea of the defendant that the present suit is not maintainable and only a petition before the NCLT is maintainable, is liable to be rejected,” ruled the High Court while deciding the issue in favour of the plaintiffs.