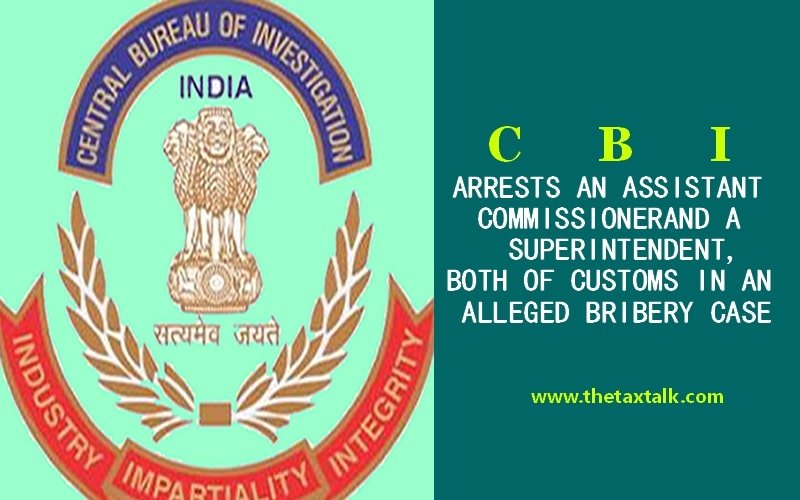 CBI ARRESTS AN ASSISTANT COMMISSIONER AND A SUPERINTENDENT, BOTH OF CUSTOMS IN AN ALLEGED BRIBERY CASE

The Central Bureau of Investigation has arrested an Assistant Commissioner and a Superintendent, both of Customs Department, Mumbai in an alleged bribery case.

A case was registered against an Assistant Commissioner(P) Customs and a Superintendent, Customs(R&I), New Customs House, Mumbai on a complaint. It was alleged that a Kolhapur(Maharashtra) based private company had purchased 74 kg of silver from a private company based at Ahmedabad on 05.10.2020. Out of the same, 60 kg silver in two packages were transported from Gujarat to Maharashtra.  It was further alleged that the said 60 kg silver was allegedly seized on 06.10.2020 by the Customs, R&I, Mumbai. The complainant had allegedly attended the enquiry before the Superintendent(Preventive) at New Customs House, Mumbai.  It was further alleged that the Superintendent took the complainant to the office of Assistant Commissioner, Customs(P) who demanded bribe from the complainant for release of the seized silver.  It was also alleged that undue advantage of Rs.15 lakh by an Assistant Commissioner(P) Customs and Rs.4 lakh by the Superintendent, Customs R&I were demanded.

CBI laid a trap and caught the Superintendent red handed for accepting the bribe of Rs.2 lakh. During investigation, the Assistant Commissioner was also caught. Search at the office and residence of both the accused were conducted, which led to recovery of incriminating documents.

Both the arrested accused were produced today before the Competent Court, Mumbai and remanded to Police Custody till 27.02.2021.