Whether the eldest Daughter can be KARTA Of HUF after Death of Senior Most Male Karta ? 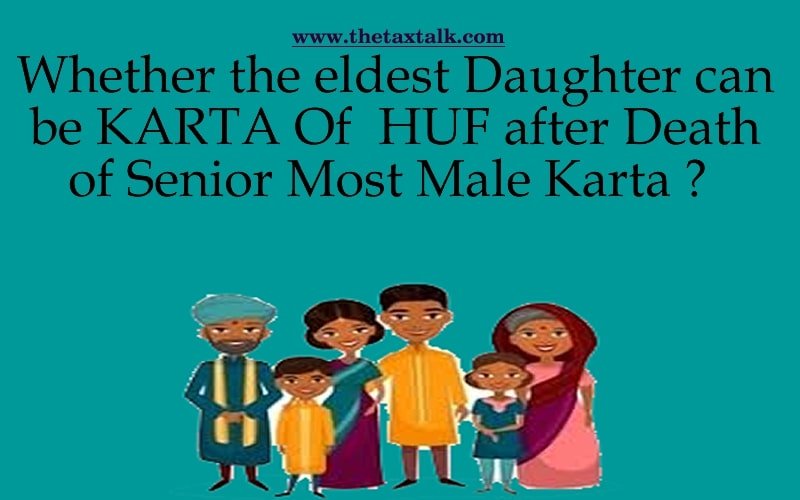 Whether the eldest Daughter can be KARTA Of  HUF after Death of Senior Most Male Karta ?

In February, 2016, Delhi High Court in a landmark verdict said that the eldest female member of the family can be its ‘karta’ in a HUF.
The court in Sujata Sharma v. Manu Gupta clarified and gave a broader interpretation to Section 6 of the Hindu Succession Act. It was argued that the 2005 Amendment to the Hindu Succession Act only recognized the rights of a female member to inheritance and does not address the issue of management of the HUF estate.
The court found the language of amended Section 6 to be clear in extending equal rights to women in terms of both, inheritance and management of the estate. It thereby clarified and expanded the ambit of the amendment to Section 6 in finding “no reason to deny Hindu women coparceners the position of karta”.
Issue 2: Is it also possible for a wife to be karta if she has a son who is above 18 years of age?
Reply : , in case of wife of the deceased karta, the same argument cannot be extended since the wife of the deceased karta is never treated as a coparcener to the HUF. A widow therefore, cannot act as karta of the HUF after the death of her husband. Interestingly, in cases where the surviving male coparceners were minors, the courts took a view that the widow can be a manager of the HUF while distinguishing the position of a manager from that of a karta.
Thus  if a woman, who is not a coparcener (widow or wife of a coparcener) has a son above the age of 18 years, in such a case it is not possible for her to be the karta of the HUF.
Tags: Daughter can be karta of HUFwife can be karta of HUF?