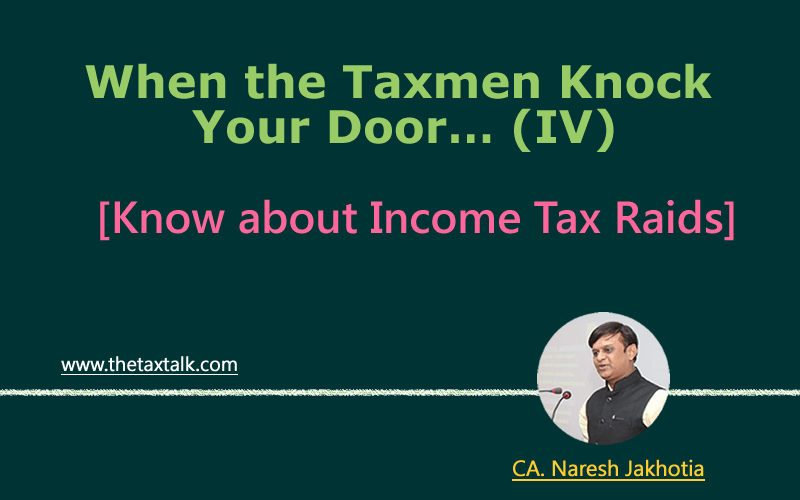 In the earlier issues of the TAX talk, we have discussed the powers of taxmen to surprisingly knock the door of taxpayers by way of Income Tax Survey & Raids. We have also discussed why and how the income tax raid happens and the duties of the taxpayers during such proceedings. It may be noted that the duties are tied with some rights as well:

Rights of the Taxpayers during Income Tax Raids:

There is a Charter of rights which has been reported in [1994] 208 ITR (St) 5. Some significant rights of the taxpayers during income tax raids are as under:

After the raid is concluded, the authorised officer has to prepare the appraisal report. Cases of assessees covered by income tax raids are centralized at a special assessment unit called “Central Circle”. Assessment of the taxpayers is carried out at the central circle and the order is passed considering all the material, documents and records found during the course of search & after considering all the submission done by the assessee.

When the Taxmen knock your door: Precaution before & after-

1  Taxpayer must ensure that the Books of account are maintained properly and are up to date.

2 All investments made in assets should be properly documented along with supporting evidence thereof.

3 Return of income should be filed within the time limit prescribed & the copies of returns of income filed along with related papers thereto should be kept properly.

4  Availability of unwanted loose papers, documents / records often invites unwanted explanations and harassment. Ensure to keep & maintain the proper papers & records and a periodic review of the records/documents should be carried out.

6 Similarly, cash holding by different family members should be well documented and must be properly explainable so as to avoid its seizure.

7  Taxpayers should ensure that the record of accountant, employee, relatives etc are not kept in their premises as there is a presumption that all documents found in the taxpayer’s premises belong to them.

9 Taxpayers must obtain the copy of Panchnama/Inventory & copies of the documents seized.

10 If there is a wrong or error in the statement, it should be done within reasonable time before the same Officials who have taken the statement.

It may be noted that the taxpayers are duty bound to extend necessary co-operation during such proceedings. As per amendment made by the Finance Act, 2002, if a person who is required to afford the authorised officer the necessary facility to inspect the books of account or other documents maintained in electronic form, fails to afford such facility to the authorised officer, he shall be punishable with rigorous imprisonment for a term which may extend to two years and shall also be liable to fine.

With this, we conclude the four week series of the write up “When the Taxmen Knock your Door…” wherein we have covered in detail the power, duties, rights, Penalties and other key features of the Income Tax Survey & Search. With the flow of data from multiple sources, the instances of survey and search is going to increase and discussion in our column is sure to help the taxpayers in better handling of the survey & search proceeding.