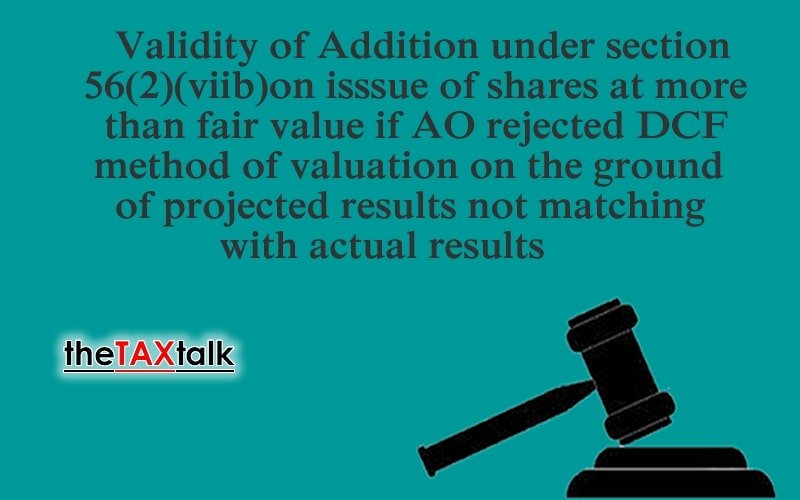 Short Overview Assessee had opted for clause (b) of rule 11U(2) by applying DCF method and obtained valuation report from a Chartered Accountant thereby fulfilling both the requirements of such specific rule on the other hand, AO was not able to pinpoint any specific inaccuracies or shortcomings in  DCF valuation report of Chartered Accountant/Valuer other than stating that year- wise results as projected were not matching with actual results declared in the final accounts. However, such rejection was unjustified as valuation report required under rule 11UA is based on future aspects of the company at the time of issuing shares, it may vary from actual figures depending on market condition at the point of time. Accordingly, addition made by AO was deleted.

It is held that Clause (b) of rule 11UA(2) refers to DCF method as supported by valuation report of a merchant banker or a Chartered Accountant. In the instant case, assessee had opted for clause (b) of rule 11U(2) by applying DCF method and obtained valuation report from a Chartered Accountant thereby fulfilling both the requirements of such specific rule on the other hand, AO was not able to pinpoint any specific inaccuracies or shortcomings in DCF valuation report of Chartered Accountant/Valuer other than stating that year- wise results as projected were not matching with  actual results declared in the final accounts. However, such rejection was unjustified as valuation report required under rule 11UA is based on future aspects of the company at the time of issuing shares, it may vary from actual figures depending on market condition at the point of time. Accordingly, addition made by AO was deleted.

The present appeal has been filed by the assessee against the order of the learned Commissioner (Appeals)-4 , New Delhi dt. 15-3-2018.

“That the learned Commissioner (Appeals) has erred on facts and under the law in confirming the addition of Rs. 1,59,39,863  as made by the assessing officer under section 56 (2)(vii)(b) of the Income Tax Act on account of alleged excess value of share premium over fair value as determined for the unquoted equity shares as issued at premium by the Appellant to its Holding Co.

Date of Valuation is also very important in the projections and estimating the growth rate of the business. Supposedly on Day 1, there is a news that the industry of the appellant is booming at a rate of 20% but suddenly on Day 2 there is major fraud or recession or because of any other reason the industry in which the appellant is declines drastically. Thus, if the valuation date is on Day 1 , projections would be different, however, if the same is on Day 2 , the projections would be entirely different.

Further, in Technical Guidance on Share Valuation issued by Institute of Chartered Accountants of India published in 2009 , the Institute have clearly stated that as the valuation is time- specific, the date of valuation is critical for the report. The valuation is pertinent to a particular point of time.

There is no reason stated in the report why it is estimated at 1. 23 and why not. 75 or why not 1.45. Details of Beta are generally available on the website of NSE, BSE or other websites of different companies. The basis of estimating Beta has been stated to be CA’ s understanding of the risk in the similar industries. Which similar industries and how this estimate is prudent and reasonable has not been explained. A slight difference in BETA can have drastic impact on Cost of Equity which can effect the valuation completely.

There is no basis for the same. Weighted Average Cost of Capital (WACC) is computed on the basis of the actual debt equity ratio in the balance sheets which is applied to the cost of equity and cost of debt. However, in such a scenario, where there is no debts, the ratio of 70 : 30 taken in the balance sheet is against the principles of valuation.

It is impossible to understand that the sale increases three-fold but there is no requirement of capital asset, even when the appellant is in the business of technology and computers etc. capex in are required with increasing work force and sales.

The valuation has been carried out on a going concern basis presuming that the company will continue its business operation in the current financial year and will continue to do business in the foreseeable future, wherein the potential investor will evaluate the expected returns and associated risks on continuing basis.

The Fair Value is based on the following:

(a) Financials forecasts made by the management of the company for 5 years and provided to us.

(b) Information gathered based on the discussions with the management and representatives of the company.

(c) The assumptions which we feel are prudent to determine the’ Pre Money valuation.

All the above information and facts have been relied on without auditing and verification.

The financials forecasts provided by the management form the basis for our DCF analysis and assumptions based on the perception of attendant circumstances of the case.

Value of Firm: The value of the firm is obtained by discounting expected cash flows after meeting all operating expenses and taxes but prior to any payments either debt or equity holders, at the weighted average cost of capital, which is the cost of the different components of financing used by the firm, weighted by their market value proportions.

Cost of Equity or the Discounting Factor: Discounting rate is the rate of return that a willing buyer would expect to receive from an investment to compensate the inherent risks involved and for the time value of money. The cost of equity is calculated on the basis of Capital Asset Pricing Model (CAPM).

On the above basis the cost of equity is arrived as follows:

Further, as the privately held shares are not traded in public, the shares of these companies are not generally as liquid as those of public companies. The last of marketability increases the cost of equity also by another 1.7 percent accordingly the Cost of Equity-becomes 14.4 percent.

Weighted Average cost of Capital – The weighted average cost of capital (WACC) is the rate that a company is expected to pay on average to all its security holders to finance its assets. The WACC is calculated taking into account the relative weights of each components of the capital structure of the Company. In the instant case of the cost of equity and cost of debt is weighted in the ratio of 70 :30. Accordingly,

Terminal Value: The Terminal Value of the Company is calculated based on the perpetuity growth model assuming a growth factor of 3 percent which is considered to be appropriate in the light of past trend and growth.

Equity Value: The Free Cash Flow and tire Terminal value are discounted to their present values at the valuation date by applying the discounting rate of 13 percent as determined above. Thereafter, after netting off the cash and cash equivalents with the loan liability as on the date of the valuation. Since, we are doing Pre Money Valuation, no calculations are considered for deriving the Post Money Equity value.

Allocating the total Pre Money Equity Value of the company arrived using the DCF valuation method of Rs. 61.74 crores among the issued equity i.e. 100000 shares, the fair value of the share is Rs. 6,175.00 (Rupees Six Thousand One Hundred and Seventy Five).

The Annexure to this Certificate contains the basis for arriving at the Fair Value of equity shares.