Starbucks guilty of profiteering for not passing benefit of tax reduction to ultimate consumers : NAA 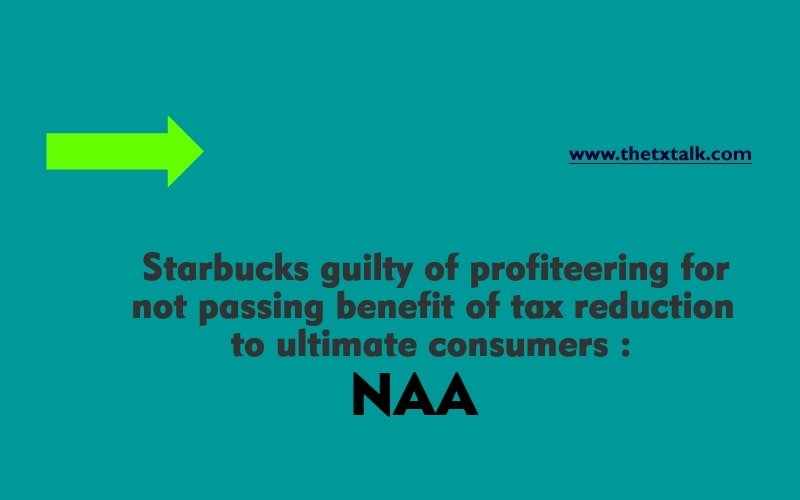 Starbucks guilty of profiteering for not passing benefit of tax reduction to ultimate consumers : NAA

Ms. Avanti Patel v. Starbucks Coffee – [2020] 122 taxmann.com 144 (NAA)
Short overview of the case:
The applicant submitted that Starbucks had not passed on the benefit of reduction in the GST rate on restaurant service when it was reduced from 18% to 5% w.e.f. 15-11-2017.
The applicant further submitted that Starbucks had increased the base prices of the food items sold by it and applied 5% GST thereon, by either maintaining the pre-rate reduction selling prices or even increasing them in the post-rate reduction period and thus it had resorted to profiteering.
The application was examined by the Standing Committee on Anti-profiteering and it was decided to refer the matter to the Director General of Anti-Profiteering (DGAP) to investigate and collect necessary evidence to determine whether the benefit of reduction in the rate of tax on the restaurant service had been passed on.
The DGAP in his Report submitted that the invoices issued by Starbucks clearly showed that it had increased the base price of the product.
The National Anti-Profiteering Authority issued notice to the parties’ involved.
It was pleaded that the change in the rate of tax with effect from 15-11-2017, with loss of ITC, required immediate adjustment in prices and these adjustments were done only to recover the increased cost due to denial of ITC.
It was also contended that Rule 126 of the CGST Rules empowered this Authority to determine the methodology and procedure for computing the extent of profiteering, however, no precise computation methodology or principles was formulated by this Authority due to which the profiteered amount was not computed correctly.
The Anti-Profiteering Authority observed that ‘Procedure and Methodology’ for passing on the benefits of reduction in the rate of tax and ITC has been clearly explained in Section 171 (1) of the CGST Act, 2017.
It denied benefit of rate reduction to the buyers of its products in contravention of the provisions of Section 171 (1) of the CGST Act, 2017 and thus resorted to profiteering.
Hence, it committed an offence for violation of the provisions of Section 171 (1) during the period from 15-11-2017 to 30-6-2018.
Since, all recipients in this case were not identifiable; Starbucks was directed to deposit the amount of profiteering along with interest in the Consumer Welfare Funds (CWFs) of the Central and the State Governments.