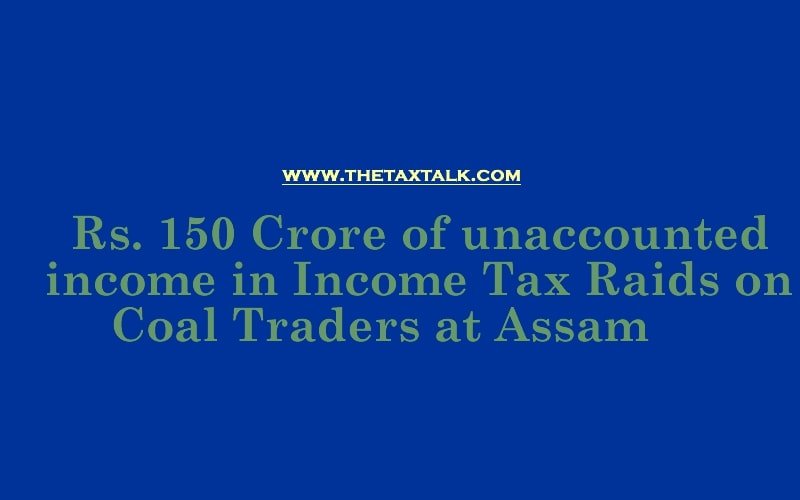 Income Tax Raid is revealing shocking figures of u accounted wealth. Now,  Income-Tax Department has detected alleged unaccounted income of more than Rs 150 crore after it raided the premises of prominent “coal traders of Assam ”. This has been confirmed by the CBDT. The Search and survey operations were carried out in the last week on December 4th 2020 at 21 locations in Guwahati, Digboi, Margherita (Tinsukia district) and Delhi, it said.

Total Cash of about Rs 3.53 crore has been seized by the department, the Central Board of Direct Taxes (CBDT) said in a press release.

The press release further said that the “Handwritten documents and diaries of cash transactions have been recovered which are not reflected in the regular books of accounts. Such transactions detected so far across all the locations combined is upwards Rs. 150 crore, of which payments made of a total of more than Rs 100 crore have been found to be violation of various sections of the Income-tax Act,” the CBDT said in a statement.

“Such seized documents are voluminous and are being investigated further,” it added.

However, the identity of the parties searched has not been mentioned in the statement issued.

Statement quoted as under:

“The main allegations against the group is that it has routed accommodation entries of more than Rs 23 crore and Rs 62 crore in the form of non-genuine share capital and non-genuine unsecured loans respectively, through certain Kolkata-based shell companies. All this was done by suppression of its true net profit”

The Raids has “established” that the group engages in out-of-books transactions. It is further alleged that loan transactions made in cash were also found to be more than Rs 10 crore.

“Stock difference of more than Rs 7 crore was found and no cogent explanation regarding the same was provided.”

“In the office of the Kolkata-based shell company acquired by one of the entities of the group, no books of accounts and ROC mandated documents were found, proving the same to be a bogus entity used only to route unaccounted income of the group,” it said.

Some cash investments in share capital “during the demonetization period” were also detected.

With this, the working of the department and the information flow could very well be visualized. This is the time for the taxpayers to ensure that the illegal or unaccounted transactions are avoided. Taxpayers may note that the tax consequences in case of income tax raid could be 138% as against normal income tax rate of 32% to 45% in general.