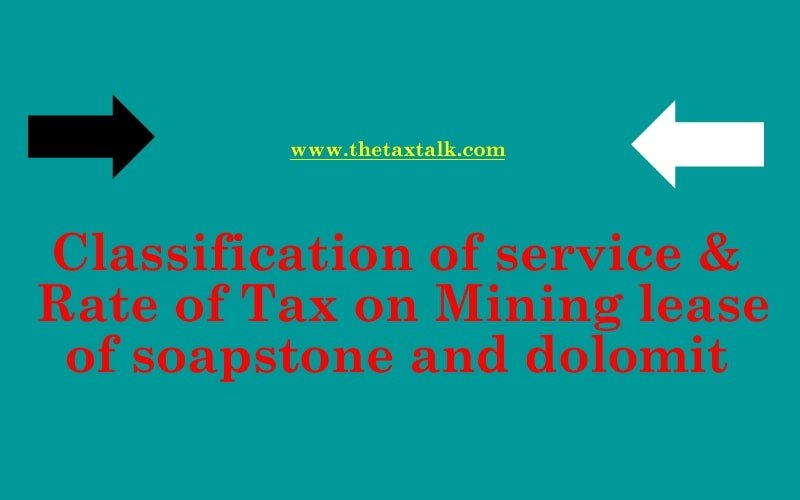 IN THE AUTHORITY FOR ADVANCE RULINGS, TAMILNADU BENCH

Note : Any appeal against the Advance Ruling order shall be filed before the Tamil Nadu State Appellate Authority for Advance Ruling, Chennai under Sub-section (1) of section 100 of CGST ACT/TNGST Act 2017 within 30 days from the date on which the ruling sought to be appealed against is communicated.

“Services related to rearing of all life forms of Animals by way of testing include testing of Animal Feeds, Feed ingredients and Feed supplements used to make feeds”

2.1 The Animal Feed Analytical and Quality Assurance Laboratory, Veterinary College and Research Institute (VC & RI) , Namakkal is a constituent Department of VC & RI under the aegis of Government of Tamil Nadu established by the Tamil Nadu Veterinary and Animal Sciences University (TANUVAS). The Applicant is involved in the Services of testing the Feed/ Feed ingredients for different parameters since 1994 for the farming community of the country. Their clients are mostly farmers, feed manufacturers and government organizations under Ministry of Agriculture. The Applicant is involved in testing the raw materials, finished animal feeds and feed supplements for its nutrient profile, contaminants, adulterants, mycotoxins and other contents. The Applicant has informed that testing of feeds, feed ingredients and feed supplements is part of rearing all life forms of animals for food, feed raw materials or other similar products or agricultural produce. They have also stated that testing of feed provides sufficient data on nutritional value which decides its feeding value, adultrant/contaminants present in those materials which reduce value and cause disorders in animal/poultry, mycotoxins which downs animal health and whether or not they are worth inclusion. This is required for proper and healthy rearing of animals and thus to obtain quality products for human beings and animals.

2.2 The Applicant has further stated under the Service Tax regimen their services were exempted under section 66D Of Finance Act 1994, which was modified vide D.O.F. No. 334/3/2013-TRU, dt. 28-2-2013, wherein in the negative entry list entry in Sub-clause(i) of Clause(d) in section 66D, the word seed was deleted for allowing benefits for all other testings related to agricultural produce or agriculture.

2.3 In the GST regime, the Applicant was charging 18 % GST on all samples submitted for technical analysis. The Applicant stated that SI.No. 54(a) Heading 9986 of Notification 12/2017-CentraI Tax(Rate), dt. 28-6-2017 exempts “services relating to cultivation of plants and rearing of all life forms of animals, except the rearing of horses, for food, fibre, fuel or raw material or other similar products or agricultural products by way of agricultural operations directly related to production of any agricultural produce including cultivation, harvesting, threshing, plant protection or testing” would include testing, testing of animal feeds, feed ingredients and feed supplements used to make feeds. The Applicant requests a ruling on applicability of exemption under this Notification including for inter-state testing services.

As per the classification of services, heading 9986 Support services to agriculture, hunting, forestry, fishing, mining and utilities and 998612 covers the following :–

This service code does not include :–

veterinary services for pets and other animals, cf. 99835

5.2 In the facts of the case at hand, the Applicant is involved in the service of testing the feed/ feed ingredients for different parameters for the farming community of the country. They undertake testing of the raw materials, finished animal feeds and feed supplements for its nutrient profile, contaminants, adulterants, mycotoxins and other contents. From the submissions it is clear that the activities undertaken by the Applicant are testing the chemical/ physiological composition of the samples of animal feed. Applying the statutory provisions to the facts of the case, it is evident that Service classification Chapter Heading 9986 covers only that genre of support services of animal husbandry like Sheep shearing, care and management of herds, pet training, grooming, etc which are support services related to the operation of animal husbandry and does not cover the services provided by the applicants, which is a mere testing service. Therefore the services of the Applicant are not covered under the purview of SAC 9986. The services are more appropriately classified under–

This service code includes testing and analysis of the chemical and biological properties of materials such as air, water, waste (municipal and industrial), fuels, metal, soil, minerals, food and chemicals;