When the Taxmen Knock Your Door…(I) 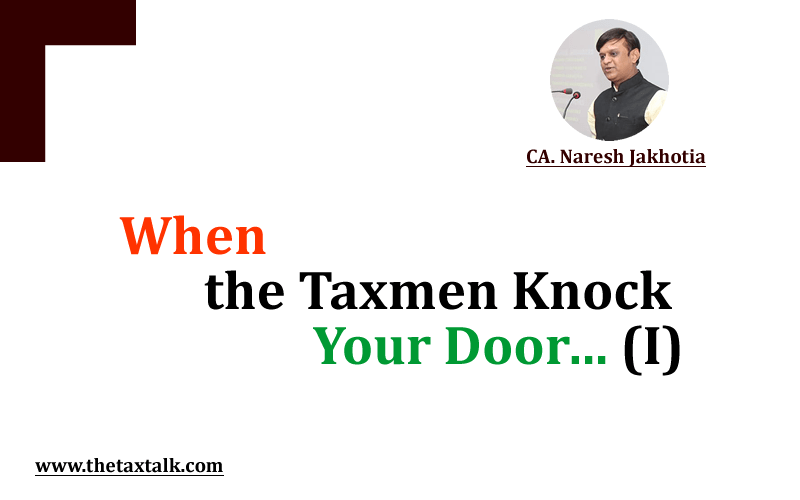 When the Taxmen Knock Your Door…(I)

The biggest weapon in the hands of the Income Tax Authorities to unearth black money or curb illegal transactions is by surprisingly knocking the door of the taxpayers through Income tax Raid or Survey. The word Raids/ Survey are the cause of biggest terror and highest fear amongst the taxpayers.

Taxpayers should not worry as the Constitution of India in Article 265 provides that “No tax shall be levied or collected except authority of law”. Further, Articles 226/ 227 of the Constitution of India provides that the citizens can approach the High Court when their fundamental rights are violated or when powers are exercised in a manner not authorised by the law. One needs to know that the powers of the income tax authorities are not the absolute & blanket power. To mitigate the possibility of its misuse by over-zealous officials, Income Tax Law has incorporated sufficient & reasonable safeguards. Similarly, taxpayers also have some rights and duties during the course of income tax raid & survey. The word “Search & Seizure” in the Income Tax Act is most commonly referred to as Income Tax Raid in the common parlance. It may be noted that there is no power contained in the Act or the Rules whereby the movement of a person against search is ordered can be restricted.

The power of Survey, search & seizure is a potent tool for the department to unearth unaccounted income, discover black money, to broaden the tax base & generate the flow of taxes in the Government Treasury. It is often also considered as a powerful tool to discourage tax evasion and malpractices.

Not everyone but only higher level of officers are authorised to carry out the income tax survey & that too by taking the required approval of their superior authorities. Lower officials of the department Authorities cannot be the authorised officer. The power of knocking the taxpayer’s door is subject to various terms & conditions which is different in search vs. Survey.

It may be noted that the business place cannot be sealed & the authorities do not have power to interrupt the ordinary business or peaceful life of citizens. Though the word search & Survey are very often used interchangeably, they are different. The purpose & objectives are also different and so are the cost, consequences and penal provisions. One needs to carefully know the differences between the search & survey as under:

The basis of selection of cases for survey and raids varies from case to case basis & is the prerogative of the department, of-course subject to certain riders. What can be done by the authorities and what not, what are the duties and rights of the taxpayers, what are the precautions that one must take during regular business operations and various other practical aspects involved, we will discuss all this in our next issue.