Unaccounted income of around Rs. 1,000 crore in the Income Tax Raid at Chennai 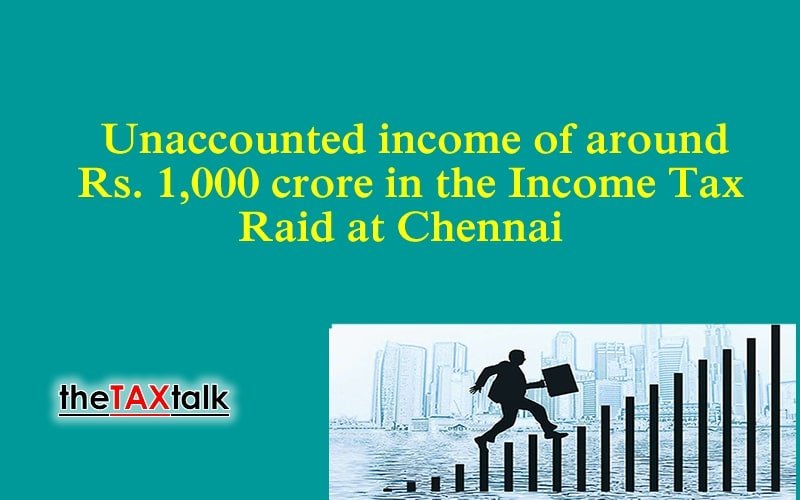 Unaccounted income of around Rs. 1,000 crore in the Income Tax Raid at Chennai

The Income Tax Department has carried out searches at 5 locations in Chennai and Madurai on 4.11.2020 in the case of a Chennai based group operating in IT Infra sector.

The search has led to unearthing of evidence relating to investments in a Singapore registered company. The shareholding of this company is held by two companies, one owned by the group searched, while the other company is a subsidiary of a major infrastructure development and financing group. It has been found that the company belonging to the searched group has invested a very nominal amount although it has 72% shareholding, while the other company having 28% shareholding only has invested almost the entire money. This has resulted into a benefit/gain of almost S$7 crore, i.e., around Rs. 200 crore, in the hands of the company belonging to the searched group, which was not disclosed by it in its return of income and also in the FA Schedule.  Thus, there is suppression of foreign income received in the form of share subscription equivalent to Rs. 200 crore, which is taxable in India in the hands of the shareholder. Further, proceedings will be initiated under Black Money Act, 2015 for not disclosing foreign assets/beneficial interest in the FA Schedule of the income tax return. The present value of this investment exceeds Rs. 354 crore.

It has been further found during the search that the group had acquired 5 shell companies recently, which were used to siphon out as much as Rs. 337 crore from the main group company by raising bogus bills and without doing any real business in these companies. The siphoned money was transferred abroad and utilized for purchase of shares in the name of the son of the main assessee. One of the directors has admitted that they have diverted funds through these companies.

Evidences have also been found regarding allotment of preference shares worth Rs. 150 crore in 2009 in the group company by passing accounting entries only, to project inflated capital before banks and financial institutions to obtain finances. Allotment of another Rs. 150 crore worth preference shares in 2015 from funds from group companies, who in turn took loans/entries, is being examined.

During the search, it was also found that the group had borrowed funds from banks on interest and diverted to other group companies free of interest for investments in properties. The total interest disallowance on this count works out to about Rs. 423 crore.

Further, the search also revealed that the group had purchased about 800 acres of land worth at least Rs. 500 crore, in the names of various shell companies from the funds provided by the main group concern. Applicability of the Prohibition of Benami Property Transactions Act, 1988 to these transactions is being examined.

It was also seen that there was transfer of substantial share holdings during the current year at a price much lower than the fair market value to be determined as per IT Rules, 1962. In view of this, substantial additions are likely to be made under section 56(2)(x) of the IT Act, 1961(the  Act) in the case of the buyer and capital gains under section 50CA of the Act, in the hands of the seller. The quantum of this will be determined in due course.

Thus, the search has led to the detection of unaccounted income of around Rs. 1,000 crore, out of which, disclosure of additional income of Rs. 337 crore has already been made by the assessee, besides actionable issues under Benami and Black Money Acts.