Profit on sale of agricultural land after conversion is Business income or Capital gains? 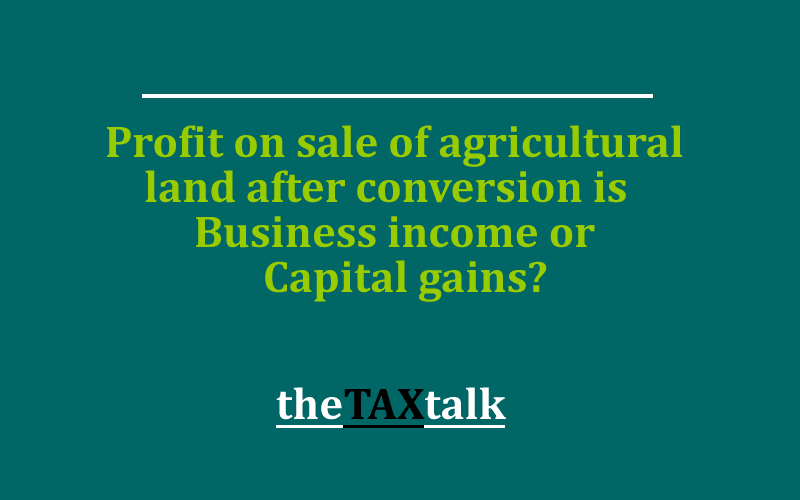 Profit on sale of agricultural land after conversion is Business income or Capital gains?

Short Overview : Plotting of land by converting agricultural land into non-agricultural land without there being intention of assessee to trade for the land could not be considered as adventure in the nature of trade and, therefore, resulting profit was taxable as capital gain only.

It is held that :  Land was purchased by assessee since long back as capital asset and was continuously held for 20 years as capital asset. There was no intention of assessee to trade for the land so purchased, contrary it was used for agricultural purposes continuously till the year of sale. Agricultural income so earned was offered in the return of income of respective years and accepted by the department. Merely conversion of agricultural land into non-agricultural land would not give rise to the taxable event until it was actually sold. Thus, assessee sold the capital asset held for long-term, accordingly, gain arising from sale was eligible for deduction under section 54F assessable as capital gain and was eligible for deduction under section 54F.

IN THE ITAT, JODHPUR BENCH

This is an appeal filed by the assessee against the order of the learned Commissioner (Appeals)-2, Jodhpur dated 5-3-2019 for the assessment year 2015-16 in the matter of order passed under section 143(3) of the Income Tax Act, 1961 [hereinafter referred to as ‘the Act’, for short].

That out of long-term capital gain arise from the transfer of above referred properties, the assessee had claimed exemption under section 54F against the purchase of residential house at Mumbai. However, the assessing officer while framing assessment treated transaction of sale of property referred above as business transaction and assessed accordingly.

That from the time of Purchase of land in the year 1995 till the conversion of the land for township, such land has been cultivated by the assessee and agricultural income from the same has been duly shown in the return of income filed by the assessee. Three persons whose lands were involved are family member.

There is substantial factual difference in the case of Rajendra Kumar Dwivedi v. CIT (2012) 26 taxmann.com 84 (All) : (2012) 349 ITR 432 (All) : 2012 TaxPub(DT) 3222 (All-HC) and case under consideration. Though the case was decided on various factual position of that case, learned Commissioner (Appeals) consider it appropriate to mention only one fact similar to present case (in fact even such similarity not exist). Learned Commissioner (Appeals) find that in the case of Rajendra Kumar Dwivedi (supra) “Hon’ble High Court held that since no agriculture operation were carried on, the income tax authorities rightly concluded that the capital asset was converted into stock in trade, and that sales of plots in the case of such land would be treated to be business activity to make profits.” In this reference we observe that in the case under consideration agriculture activities were carried on by the assessee continually and in the year under consideration also agriculture income has been declared and same has been considered for income tax computation. Therefore reliance placed on by the learned Commissioner (Appeals) on the judgment of Rajendra Kumar Dwivedi (supra) is uncalled for. It is pertinent to mention that Hon’ble Jurisdictional High Court of Rajasthan in the case of CIT v. Sohan Khan (2008) 304 ITR 194 (Raj) : 2008 TaxPub(DT) 1941 (Raj-HC) held as under :–

“4. The assessing officer found the sale to be not taxable as capital gain, but it was found to be a business income, and for that, the assessing officer found, that the original land is surrounded by many lands of his near relatives and family members, and if the plots would have been carved out from his land alone, they could not have been sold for want of network of roads being available up to the adjoining lands only, and that, at some distance there is government road measuring 200 ft. Then the other circumstance is, that all the land owners had planned the sale of plots, in Nagnechi Scheme, and Vallabh Garden, together, and no land could be sold for residential purposes. Then the next ground considered is, that the purchasers were impressed by the fact that all the land belong to the same family, and is being planned, and sold together, at no stage the huge property of the assessee or his family members was used for personal purposes, and the intention was to gain profit only. Inter alia with this, it was concluded, that the transaction was in the nature of trade.

Mere fact that there was a series of transactions of sale only, by selling the part of the whole land, purchased in one go, or purchased once upon a time, in piecemeal, would not render the activity of sale to be an “adventure in the nature of trade”.

In the present case, there is nothing to show that the land was purchased with the intention to sell at a profit, or with requisite intention, to bring it within the parameters of “stock-in-trade”.

It is not shown that the assessee is a regular dealer in real estate. It appears, that the land was purchased in 1970, which was under cloud of land ceiling laws, and after that cloud was cleared, and other adjoining lands had been developed, and since the land was not yielding any return, it was decided to be sold in piecemeal, by earmarking plots, but then nonetheless it would remain a disposal of the capital asset only, and not a transaction of any “stock-in-trade” so as to be described as “adventure in the nature of trade”. Obviously therefore, it is liable to be taxed only, as the capital gain.”

Agricultural income so earned were offered in the return of income of respective years and accepted by the deptt. Similarly, the Fateh Hills property was acquired long back in the year 2010-11 as capital asset and was so held as capital asset in the balance sheet. Merely conversion of the agricultural land into non-agricultural land will not give rise to the taxable event until it is actually sold. Thus, the assessee has sold the capital asset held for long-term, accordingly, gain arising from sale was eligible for deduction under section 54F of the Act. Accordingly, we direct the assessing officer to treat the property on sale of land as capital gains and given the benefit of exemption claimed by the assessee under section 54F of the Act. We direct accordingly.

“That learned assessing officer on the basis of finding recorded in Para 19 & 20 disallowed half of construction cost claimed on the property transferred during the year under consideration. From the bare reading of finding recorded while disallowing claim of construction cost it appears that learned assessing officer recorded finding without considering documents produced for verification and documents submitted during the course of assessment proceeding. The finding that “No bills supporting such expenditure were provided to this office despite being asked clearly.” is totally incorrect as the documents relevant to construction cost has been produced during the course of hearing and same has been verified by the learned assessing officer on test check basis. It was submitted that plot wise details has not been maintained and total construction cost incurred has been averaged and claimed accordingly against property sold. Submission made had been reproduced by the learned assessing officer in the assessment order (page 16 of assessment order). Therefore finding recorded with reference to non-production of documentary evidences is grossly erroneous and contrary the material available on record. With reference to non-reflecting of entries in bank statement on voucher to voucher and day to day basis was that for multiple invoices/expenditure payment was made through single cheque.

A detailed submission showing each payment from bank account towards nature of expenditure and documents detail thereof [PB 33-46 (36-38), 56-66] were produced/submitted before learned assessing officer. Going through such detail your good self will observe that all payment referred therein are not in next year. The submission of the assessee was that payment of multiple invoices was made through one cheque and at different date than of invoice. A detailed chart about the expenditure claimed and payment thereof through bank has been submitted during the assessment proceeding.”