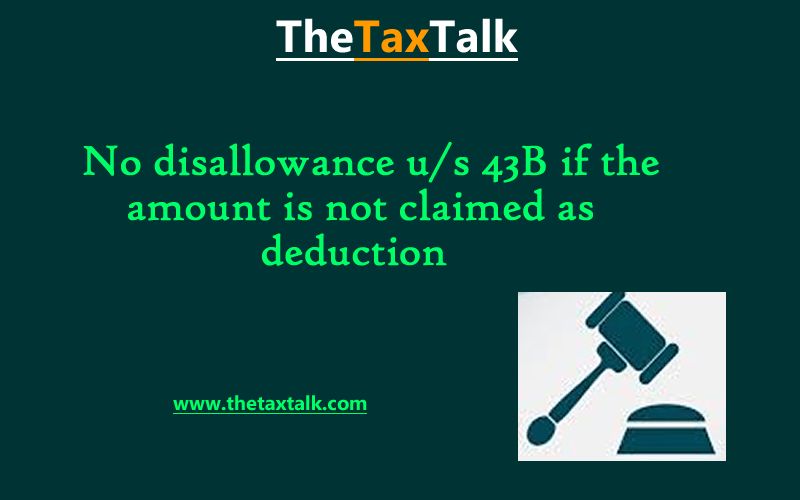 Where no claim of deduction in respect of taxes and duty is made and no charge is made in profit or loss account, liability payable is not to be disallowed and not to be added back to income of assessee by invoking s. 43B.

It is held in various cases that Section 43B is not attracted at all when the assessee does not claim any deduction of the amount; since the question raised by the Revenue does not bring out the real controversy in issue viz., disallowance of unpaid sales-tax the question referred regarding taxability of sales-tax as part of business income or trading receipt is returned unanswered.

Sec. 43B declares that taxes and duties shall not be allowed as deduction from the income unless they are actually paid. It removes the doubt as to the meaning of the word “paid” according to the method of accounting regularly employed by an assessee, insofar as deduction is claimed in respect of any sum payable by way of tax or duty. The declaration does not, however, place any restriction on the business activities and on the system of accounting. Therefore, s. 43B shall only be attracted when the assessee claims deduction for any sum payable by way of tax or duty under any law for the time being in force, and, as such, where no such deduction is claimed nor charge made to the profit or loss account, there was no question of disallowing the amount taken to the balance-sheet on the liabilities side as well as of “add back”. One can rely on CIT vs. S.B. Foundry (1990) 185 ITR 555 (All) as well.  The copy of the judgement is produced hereunder:

Having heard learned counsel for the Revenue, we are not satisfied that any statable question of law arises in this case. In the assessment year 1984-85 which is in dispute, the ITO added a sum of Rs. 10,003 with the following remarks :

Tags: CIT Vs. S.B. FoundryDisallowance if Tax is not debited to P & Lsection 43B