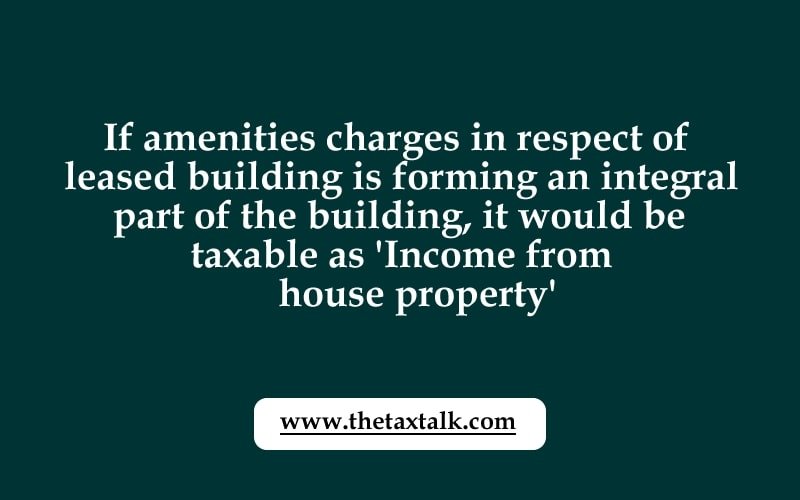 Short Overview : Where amenities available in leased building, were part and parcel of the building, the amenities charges would fall under the head “Income from house property” even though there were two separate agreements i.e. one for leave and licence and other for amenities.

It is held that It was found that the amenities available in the building were RCC frame structure, marvel/granite in common areas, lobbies, two elevators, CCTV in common areas, water supply, electricity, etc. If the nature of such amenities was analyzed, those were clearly part and parcel of the building. Further, the agreement of leave and licence and other for amenities was composite one and one could not be enforced without the other. Further, both the agreements were the basic agreements and were integral part to use of licence premises and their uses co-extensive/co-terminous, therefore, both the agreements could not be segregated, and hence, the charges for amenities were rightly declared under the head |Income from house property|.

IN THE ITAT, MUMBAI BENCH

2. The only issue in this appeal of assessee is against the order of Commissioner (Appeals) upholding the action of the assessing officer in treating amenity charges amounting to Rs. 13,35,534 as income from other sources instead of income from house property. For this assessee has raised the following ground No. 1 :–

1.2 He failed to appreciate the fact that both the agreements of leave and license and amenities are composite and dependent on each other.

1.3. He failed to appreciate and erred in not following the Appellant’s own case for the assessment year 2009-10 given by jurisdictional Hon’ble Tribunal.

1.4 The Appellant prays that said Income received under be treated as Income from House Property.”

The other grounds raised as ground no. 2 by the assessee is without prejudice to ground No. 1. Hence, we will deal with the first ground first.

“18. In view of foregoing discussion, I uphold the decision of assessing officer to treat the income arising from separate agreement for services as income from the other sources. Accordingly, issues raised directly in grounds of appeal stands dismissed. My decision has come after duly analyzing relevant clauses of the agreements concerned, after considering the fact that on rental value part covered by amenities agreement Municipal property tax is not paid which by itself takes it out of section 23, the arrangement and claims is artificial aimed at evading both Central and State Tax and after analysis of judicial decisions including 2 cited by appellant and one by assessing officer. These facts were not presented before Hon. ITAT while dealing with decision in ITA No. 2012/2015, dated 29-11-2016 and ITA No. 6733, 6854/Mum/2011 and ITA No. 3851,4760/Mum/2012 all, dated 24-6-2016 and on new material and facts, new view is taken.”

5. Now before us, the learned commissioner of the assessee Miss. Dinkle Hariya first of all argued that this issue is squarely covered by Tribunals decision in assessee’s own case and she filed copy of Tribunal order for assessment year 2002-03 in ITA No. 6880/Mum/2013 vide Order, dated 5-11-2015. She also argued that there is no distinguishing feature as the agreements are same as in earlier years and are continuing agreements and there is no distinction as such. She filed this copy of order in the official mail ID provided in ITAT’s Website Notice Board i.e. https://www.itat.gov.in/page/content/Notice-Board. On the other hand, the learned Departmental Representative Miss. Samanta Mullamudi, she pointed out from the assessment order that once the amenity charges were included in the consolidated rent agreement, the same would have increased this stamp duty payments which is not paid and moreover, it would be difficult to work out the proportion of common area, other common facilities and hence, entering into two separate agreements, the assessee has indulged in colorable device to avoid substantial tax liability by claiming deduction under section 54 of the Act. She stated that the Commissioner (Appeals) has already noted the distinguishable fact of the present year and what was before ITAT in earlier as the case law referred by the assessee.

6. We have heard the rival contentions and gone through the facts and circumstances of the case. Admittedly, the assessee has declared the rental income of Rs. 33,08,372 including the amenity charges received vide two separate agreements. The amenities provided by the assessee by these two separate agreements are detailed out by the assessing officer in assessment order in Para 7 and the relevant read as under :–

7. We noted that the Tribunal in assessee’s own case has considered this issue for assessment year 2002-03 in ITA No. 6880/Mum/2013 vide Order, dated 5-11-2015 considered this issue as amenity charges and held that the same falls under income from house property and not income from other sources. The Tribunal gave its finding at Para 2.3 as under :–

“2.3. If the observation made in the assessment order, leading to addition made to the total income, conclusion drawn in the impugned order, material available on record, assertions made by the learned respective counsel, if kept in juxtaposition and analyzed, we note that the amenities available in the building was RCC Frame Structure, Marvel/granite in the common areas, lobbies, etc, Kotah in staircases, two elevators, control room: CCTV in common areas, water supply, electricity, AHU Room and Fire Control System. If the nature of these amenities are analyzed, these are clearly part and partial of the building. Both the agreements of leave and licence and other for amenities are composite one and one cannot be enforced without the other. These are the basic agreement and are integral part to use of licence premises and their uses coextensive/coterminous, therefore, these cannot be segregated, thus, the charges for amenities were rightly held to be income from house property, thus, the claimed deduction is also allowable, therefore, we affirm the stand of the learned Commissioner (Appeals).”

9. In the Result, the appeal of the assessee is allowed.

Tags: taxation of rent towards amenities