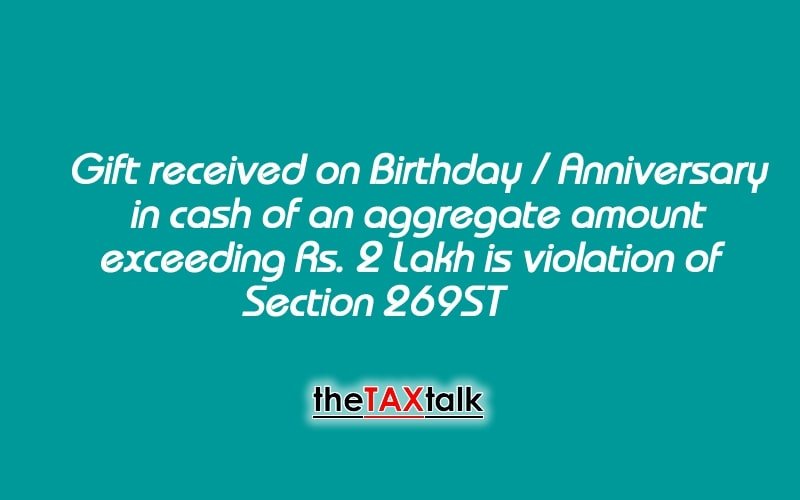 There are numerous provisions in the Income Tax Act – 1961 which prohibits cash transactions. One such provision is there by way of section 269ST which was introduced in the year 2017 by the FA-2017. The provision is very simple in drafting and can be easily understood. It reads as under:

Provided that the provisions of this section shall not apply to—

(ii) transactions of the nature referred to in section 269SS;

(iii) such other persons or class of persons or receipts, which the Central Government may, by notification in the Official Gazette, specify.

(a) “banking company” shall have the same meaning as assigned to it in clause (i) of the Explanation to section 269SS;

(b) “co-operative bank” shall have the same meaning as assigned to it in clause (ii) of the Explanation to section 269SS.’.

Contravention of section 269ST would result in levy of penalty under section 271DA, which reads as under:

The Finance Minister, in the parliament, justified the introduction of introducing section 269ST with following words:

“In India, the quantum of domestic black money is huge which adversely affects the revenue of the Government creating a resource crunch for its various welfare programmed. Black money is generally transacted in cash and large amount of unaccounted wealth is store and used in form of cash”

However, though the section is simple in reading, the consequences and interpretation may not be so. There are situations where it may result in absurd consequences. One such instance could be on the occasion of celebration of Birthday, Anniversary or Marriage etc.

Let us consider a case of a birthday party wherein a person has invited a number of guests and they have gifted the amount in cash to the birthday boy or a girl.

More categorically, it bars “in respect of a single transactions”. Birthday, Anniversary or marriage is obviously a “single event”. What needs to be checked is whether a single event is to be counted from the perspective of giver or taker?

This may not have been the intention / logic but the way the section is drafted, even genuine Transactions in Cash would be affected by Section 269ST unless and until government provides certain genuine exclusion by notification.

Though the wording of the new law is simple, the outcome would not be so. Though the object is noble, its implications would be draconian. Further, the section is unfettered & it places restriction on the recipient (& not on payer). The nature & character of receipt is irrelevant i.e., exempt income or taxable income etc. There is no exemption even for sale of agricultural produce.