Validity of addition of Rs. 5 Cr received as Gift out of Natural Love from brother in law without any occasion 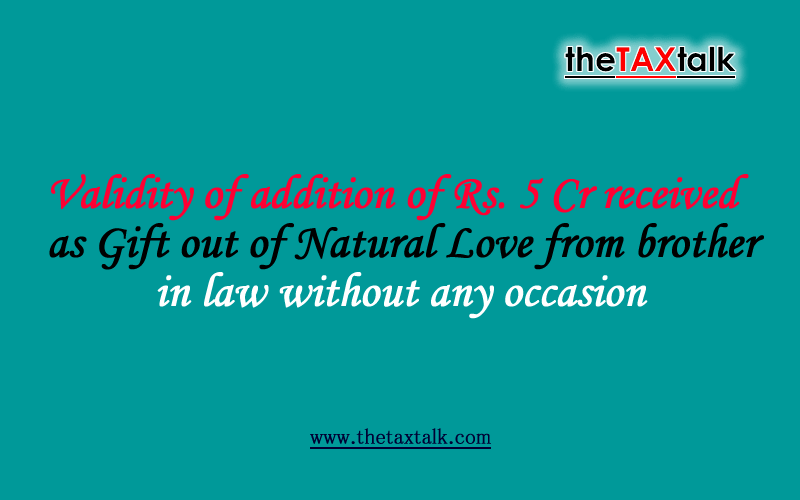 Validity of addition of Rs. 5 Cr received as Gift out of Natural Love from brother in law without any occasion

PCIT(C) v. Arvind N. Nopany (2020) 313 CTR 87 : 185 DTR 369 (Guj.)
A search was conducted under section 132 of the Act on 29.09.2011 in the Nopany Group cases at Baroda including the case of the assessee. The documents which were received from the residents as well as the factory premises of companies in which assessee was a director during search proceeding revealed amounts of Rs. 5,00,00,000 were received by the assessee as gift from one Shri Narotam Sekhsariya. Shri Narotam Sekhsariya was the brother-in-law of the assessee (sister’s husband) being the founder of Ambuja Cements Ltd. and remained its Managing Director till recently. Shri Narotam Sekhsariya was the 40th richest Indian according to Forbes.com. The assessee thereafter produce the documents of the said Shri Narotam Sekhsariya to prove his identity and creditworthiness: (1) Copy of his PAN card (2) Capital account statements for the assessment year 2007-08, 2008-09 and 2009-10 (on a perusal of these statements, your goodself will observe that the Donor had large capital base and have duly reflected these gifts given to me) (3) Copy of his Bank Statements reflecting the gifts (4) Assessment orders for the Assessment years 2008-09 and 2009-10. It was the case of the assessee that out of his natural love and affection the donor has gifted amount to the assessee from his income/capital. The donor is a high net worth individual. According to the assessee, the gifts were not liable to income tax in his hands under Income Tax Act as they were ‘capital receipts’. Section 56(2)(vi) also exclude gifts from individuals from certain specified relatives including ‘brother-in-law’ from the purview of taxation. However, such plea of the assessee was not found acceptable by the Learned Assessing officer. Upon perusal of the evidence so placed before him by the assessee so as to prove the identity and creditworthiness of the donor he then added Rs.5,00,00,000/- in the hands of the assessee as not falling under section 56(ii) and (vii) of the Act under the head Income from Other Sources and gift was given without any reason and occasion. which was deleted by the Learned CIT(A).
Dismissing the appeal of the revenue the Court held that the Tribunal took into consideration the details of the donor, more particularly, the PAN number, capital gain statement, bank statements and the other relevant documents. Upon perusal of the same, the Tribunal concurred with the findings recorded by the CIT(A) as regards the genuineness of the transaction. The tribunal, thereafter, looked into the Section 56 of the Act. Court also held that plain reading of Section 56(2)(vi), more particularly, the explanation (e) of the provision would indicate that the assessee, would fall within the definition of the term “relative” as explained under Section 56 of the Act. (Related Assessment year : 2008-09)
Tags: Gift out of natural loveoccasion needed for gift section 56Taxation of gift