SUMMARY OF KEY FINDINGS AND RECOMMENDATIONS IN THE CAG’S PERFORMANCE AUDIT REPORT ON INCOME TAX SEARCH AND SEIZURE ASSESSMENTS (Report No.14 of 2020) 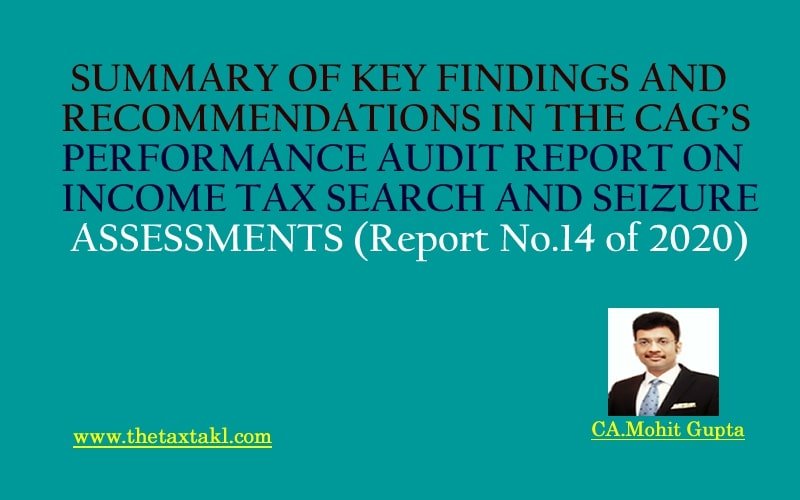 SUMMARY OF KEY FINDINGS AND RECOMMENDATIONS IN THE CAG’S PERFORMANCE AUDIT REPORT ON INCOME TAX SEARCH AND SEIZURE ASSESSMENTS (Report No.14 of 2020)

Performance Audit Report No.14 of 2020 on Search and Seizure Assessments in Income Tax Department, Union Government, Department of Revenue – Direct Taxes by the Comptroller and Auditor General of India.

Search and Seizure is a very powerful tool available with the  Income Tax Department to unearth any concealed income or valuables and to check the tendencies of tax evasion thereby mitigating the generation of black money. Authority and power to conduct search and seizure operations is strident and caustic power authorized by law to be taken recourse to when the conditions mentioned under different clauses of Section 132 (1) of the Act are satisfied. The jurisdictional facts that have to be established before a search under Section 132 (1) of the Act can be authorised are that (i) the authority issuing the authorisation is in possession of some credible information, other than surmises and conjectures (ii) that the authority has reason to believe that the conditions stipulated in clauses (a), (b) and (c) of Section 132 (1) qua the person searched exist; and (iii) the said information has nexus to such belief. Section 153A provides for the procedure for completion of assessment in case of a person where a search is initiated under Section 132 or books of account or other documents or any assets are requisitioned under Section 132A after 31st May, 2003.

Performance Audit conducted by the Comptroller and Auditor General of India :-

The CAG of India conducted the performance audit on search and seizure assessments in Income Tax Department with the objective to examine (i) the extent of compliance with the existing provisions of the Act/Rules /Circular/Instructions in making such assessments and also to point out systemic deficiency, if any, in these assessments; and (ii) the efforts made by the department in coordinating with other Government agencies/different wings of the department to disseminate information during the course of assessment, regarding undisclosed income detected during search and seizure operations (iii) Sustainability of additions made in assessments in search and seizure cases at the appellate stage (iv) Implementation of the recommendations made in the CAG Report No.7 of 2006.The Performance Audit (PA) covered the search assessments completed during the financial years 2014-15 to 2017-18. Total 1417 number of Groups were assessed during the period 2014-15 to 2017-18 by different field offices under the CAG’s audit jurisdiction. Out of this audit universe sample of 185 Groups was drawn. The audit team checked 24,869 assessment records with assessed income of 1,71,503.78 crore during the performance audit wherein they issued 1659 observations related to absence of provisions in the Act, non-compliance to the Income Tax provisions, non-centralization of search assessees, non uniformity in making additions, non-implementation of the recommendations given in the Appraisal Report during search assessments and non-levy of penalty etc. having tax effect of 4150.02 crore. Besides, the audit team also analysed the sustainability of additions made during search assessments.

Para-wise findings as detailed in CAG’s performance report no.14 of 2020 are summarized herein under :-

CAG’s recommendations as detailed in CAG’s performance report no.14 of 2020 are summarized herein under :-

– The CBDT stated (June 2020) that the issue shall be examined by TPL Division.

However, the audit is of the view that all the assessees related to issues pointed out in Appraisal Report may be centralized and their assessments should be completed in a nameless/faceless manner, where the assessees as well as AOs are not aware of each other’s identities, to ensure transparency in the assessments.

– The CBDT agreed (June 2020) to examine the audit recommendation.

– The CBDT stated (June 2020) that the existing practices/mechanisms already provide for effective sharing of information within the Department as well as with other Government agencies and the Board has issued various instructions from time to time directing the field formations concerned to adhere strictly to the timeline. However, the CBDT agreed that the mechanism in place needs to be strengthened.

– The CBDT stated (June 2020) that after obtaining the report from Pr. CIT, they will find out the lapses and ensure that the same do not occur in future.

Recently, in the year 2016, Mr. Mohit Gupta have authored two comprehensive books on the Income Declaration Scheme’2016, titled as “Law  Relating  to  Income  Declaration  Scheme’2016”.  His  books  provided at one place the entire gamut of the Law relating the Income Declaration Scheme ‘2016 and set to rest all the queries that arose before, during and after the course of making the declaration under the Income Declaration Scheme’2016. The books received an extremely overwhelming response from the readers including the proposed tax payers, tax administration, tax professionals, corporate houses and academicians. The said books were released by erstwhile Hon’ble Union Finance Minister, Shri. Arun Jaitley, Shri.Arjun Ram Meghwal, Minister of State for Finance and the Chairman of Central Board of Direct Taxes and many other dignitaries.

Due to his continuous desire to always rise on the learning curve, he always have a quest and quench to read more, learn more and perform even more.