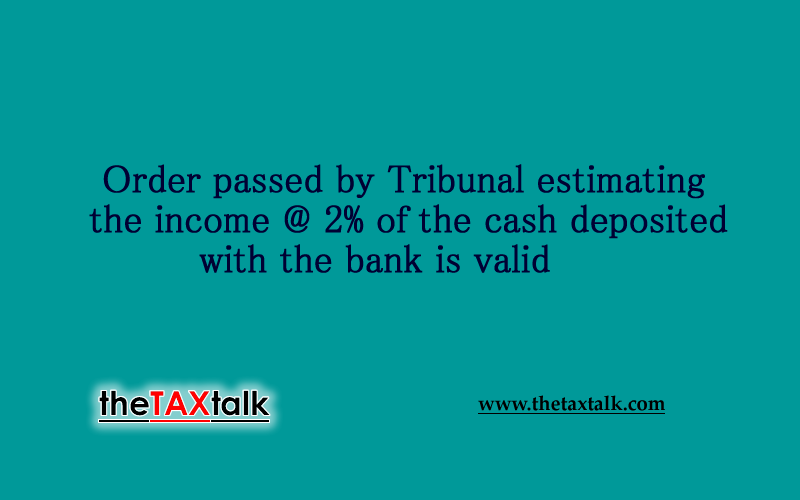 The issue before Gujarat HC was whether the order passed by Tribunal estimating the income at the rate of 2% of the cash deposited with the bank is valid.

such is the view of the Tribunal,, then we should not disturb the same. The question as proposed by the Revenue cannot be termed as a substantial question of law. Short Overview of the case:

The assessee had filed return for relevant AY. During assessment the AO noted that huge amount of cash credits in the bank account of the assessee.

The assessee was asked to explain the source of cash deposits of Rs.2,72,89,000/- in the current bank account.

The AO framed the assessment u/s 143(3) read with Section 147 after making addition u/s 68 and 69A for the huge cash deposits in the saving bank accounts.

The CIT(A) called for the remand report and thereafter dismissed the appeal of the assessee.

The Appellate Tribunal condoned the delay in filing the appeal and directed the CIT(A) to dispose of the appeal on merits.

The CIT(A), directed the AO to delete the addition of Rs.7,78,35,500/- made u/s 68 and considered the deposits as the turnover of the assessee. The CIT(A) also directed to adopt the net profit rate of 8% on the turnover.

The assessee being dissatisfied with the order passed by the CIT(A), preferred appeal before the Appellate Tribunal.

On appeal, the High Court held that the order passed by Tribunal estimating the income at the rate of 2% of the cash deposited with the bank is valid.