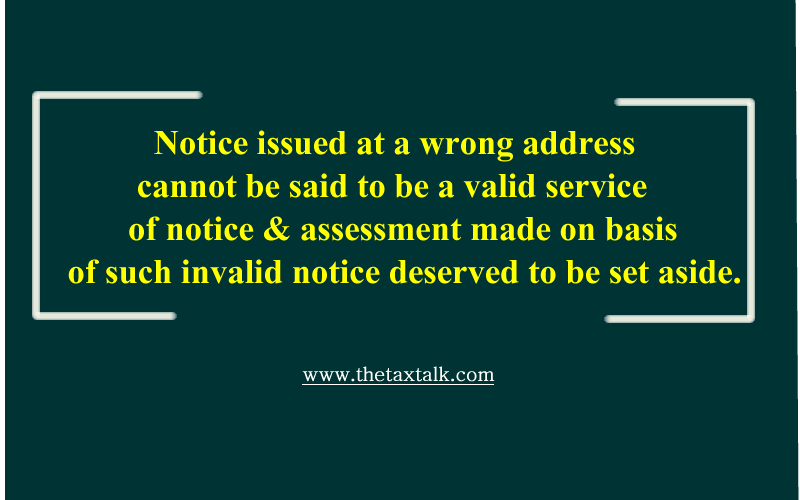 Short Overview Where notice under section 143(2) was served to assessee on address, which was none of addresses as specified in rule 127(2) of Income Tax Rules, 1962, assessment order passed on basis of such invalid notice was set aside.

It is held that  Notice issued at a wrong address cannot be said to be a valid service of notice. Since in instant case, address which was mentioned in notice under section 143(2) was none of addresses as specified in rule 127(2), service of notice could not be regarded as proper or valid service and, thus, consequent assessment made on basis of such invalid notice deserved to be set aside.

IN THE ITAT, DELHI ‘A’ BENCH

The above captioned cross appeals filed by the Revenue and the assessee are preferred against the order of the Commissioner (Appeals)-13, New Delhi pertaining to assessment year 2009-10. The assessee has also filed cross objection in ITA No. 1184/DEL/2017. Since both the appeals and cross objection pertain to same assessee and were heard together involving common issues, these are being disposed off by this common order for the sake of convenience and brevity.

2. Briefly stated, the facts of the case are that the assessee filed his return of income disclosing total income at Rs. 1,53,300 and agricultural income of Rs. 2,60,000. The return was selected for scrutiny under CASS guidelines and during the course of assessment proceedings, the assessee was asked to explain the funds deposited in the four bank accounts operated by the assessee but since no explanation was forthcoming, the assessing officer treated the peak credits in the bank accounts as unexplained and made addition of Rs. 1,42,45,849. Assessment was completed at an income of Rs. 14,99,150.

3. Aggrieved, the assessee the approached, the first appellate authority and challenged the addition on merits. The assessee has also raised objections to the assessment proceedings by raising a ground that the statutory notice under section 143(2) of the Income Tax Act, 1961 [hereinafter referred to as ‘the Act’ for short] was not served on the assessee.

4. The learned Commissioner (Appeals) allowed partial relief to the assessee on merits.

5. Now aggrieved with the order of the learned Commissioner (Appeals), both the assessee and the revenue are in appeal and the assessee has also filed cross objections.

8. The learned counsel for the assessee placed reliance on the judgment of the Hon’ble Delhi Court in the case of CIT v. Eqbal Singh Sindhana 2008 TaxPub(DT) 0614 (Del-HC) wherein the Hon’ble Delhi High Court had held that where no notice under section 143(2) has been served upon the assessee within the prescribed period, assessment made by the assessing officer was invalid. The learned counsel for the assessee also relied on a catena of decisions in which the Hon’ble High Courts as well as the co-ordinate benches of ITAT have held that the assessment proceedings completed without service of notice under section 143(2) of the Act could not be considered as valid assessment proceedings.

9. Per contra, the learned Sr. D.R. filed written submissions which have been placed on record. Placing reliance on the orders of the authorities below, the learned D.R. vehemently argued that assessment was valid and since the assessee had cooperated in the assessment proceedings, service of notice no longer remain a valid objection.

11. The Hon’ble Delhi High Court has on numeric occasions held that notice issued at a wrong address cannot be said to be a valid service of notice.

12. Rule 127 of the IT Rules prescribes the mode of service of notice, summons, requisitions and other communications. As per Rule 127(2), the address on which the communications are to be delivered or transmitted would be :–

(i) The address on which the communications are to be delivered or transmitted;

(ii) The address available in the PAN Data base of the assessee;

(iii) Address available in the last Income Tax return furnished by the assessee, and

(iv) In the case of addressee being a company address of registered office as available on the website of the corporate affairs.

13. Undisputedly, in the case before us, the address which has been mentioned in the notice under section 143(2) of the Act is none of the addresses as provided in Rule 27(2) and, therefore, it can be safely concluded that service was not proper in terms of Rule 127 of the Income Tax Rules.

14. Since in the instant case the notice under section 143(2) was not served, the consequent assessment made on the basis of such invalid notices cannot be treated as valid assessment and, therefore, assessment order deserves to be treated as null and void and is liable to be quashed and annulled. We order accordingly. Thus, Ground No. 1 in assessee’s appeal in ITA No. 56/DEL/2017 stands allowed.