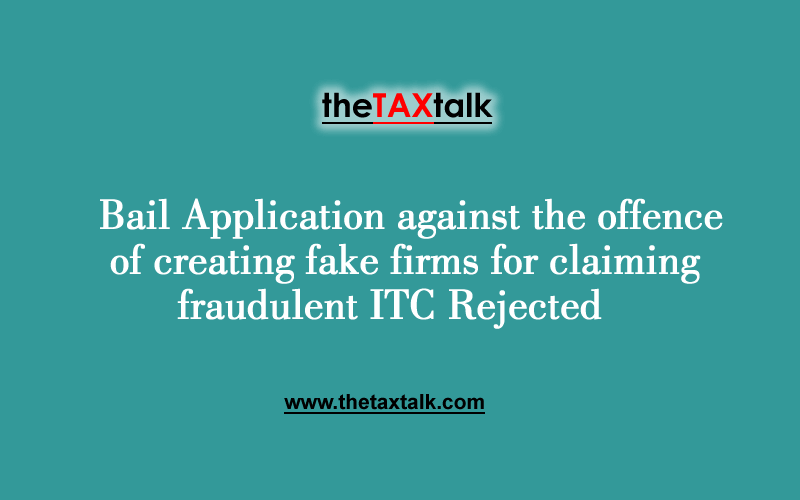 The petitioner has filed the petition to grant the bail against the offense committed under GST by creating fake firms and claiming such fraudulent input tax credit. Unconvinced with the petition, High Court stated that, department has not sought custodial interrogation of the accused. However, in view of the allegations of creating fake firms and claiming such fraudulent input tax credit and routing them through various fake firms shows the propensity and wherewithal of accused in committing such crimes. HC satisfied if released on bail at this stage, the accused Amit Kumar Jain most likely will make an attempt to influence the proprietors / partners of the firms involved. The plea that accused has no previous criminal antecedents is humbly rejected as it may also point out that similar crime of accused if any, committed previously remained undetected. The pre trial detention of accused Amit Kumar Jain is necessary at this stage as if released on bail, he will not only try to won over the public witness but may make an attempt to erase the money trail of the alleged crime, hence no ground for bail is made out at this stage. Bail application is accordingly dismissed.

Here is a Copy of the Order

Proceedings conducted thru physical hearing as well as video conferencing on Cisco Webex.

(iii) Gravity of the offence and punishment which the conviction will entail,

(iv) Reasonable possibility of securing presence of the accused at trial and danger of his absconding or fleeing if released on bail,

(v) Character and behavior of the accused,

(vi) Means, position and standing of the accused in the Society,

(vii) Likelihood of the offence being repeated

(viii) Reasonable apprehension of the witnesses being tampered with,

(ix) Danger, of course, of justice being thwarted by grant of bail,

(xi) Any other factor relevant and peculiar to the accused.