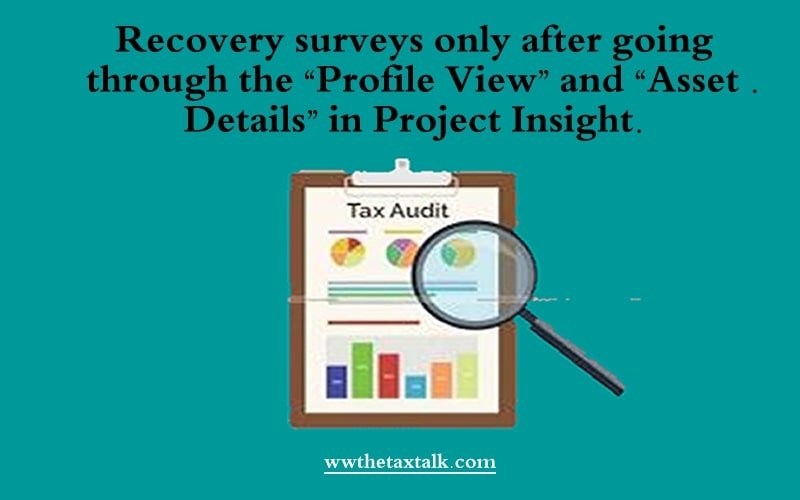 CBDT has instructed the department to resort to survey as a last resort only. It has also relaxed its earlier guidelines for intrusive & coercive recovery. The circular issued says that the recovery surveys only after going through the “Profile View” and “Asset Details” in Project Insight. With this circular, the recovery & survey proceeding will start taking shape, though with cautions and care. The authority to carry out surveys has also been now given to collegium consisting of more than one officer.

In totality, the approach adopted by CBDT is really appreciable. The Government looks concerned for the taxpayers and is making all attempts to ensure transparent and better tax administration in the country.

The circular reads as under:

Subject: Order under section 119 of the Income-tax Act, 1961 for exercising power of intrusive or coercive action for recovery of tax demand by Assessing Officers or Tax Recovery Officers-reg‑

In pursuance of Board’s letter F.No. 275/29/2020-(IT(B) dated 21st September. 2020 wherein at Para 2(ii) it was stated that with respect to any coercive action like attachment or intrusive action like recovery survey etc. by the Assessing Officers (AOs) or Tax Recovery Officers (TROs), separate guidelines are being issued and in further pursuance of ” The Taxation and other Laws (Relaxation and Amendment of Certain Provisions) Act, 2020″, prescribing the “income-tax Authority” for the purpose of power of survey u/s 133A of the Act, the Central Board of Direct Taxes, in exercise of powers under section 119 of the act, hereby directs that‑

(i) Any coercive or intrusive action for recovery of tax demands should be taken only after exhausting alternative means of recovery as mentioned in Para 2((i) of Board’s letter F.No. 275/29/2020-(MB) dated 21 September, 2020.

(ii) Recovery surveys should be resorted to only in cases where the taxpayer/ defaulter is not responding to the notices or notices are not getting served or recovery of taxes is not taking place even after going through the “Profile View” and “Asset Details” in Project Insight.

(iii) It may be noted that as per amended section 133A, the surveys can be conducted only by officers of Investigation or TDS Wing.

(vii) In the event of any disagreement between the officers in the Collegium, the issue would be resolved by the Pr. CIT of the region.

(viii) Officers of TDS or Investigation Wing will involve AO or TRO concerned and the survey will be conducted as per the established survey procedures.

(ix) The Pr. CIT/CIT/Pr. DIT/DIT of the Investigation or TDS Wing should monitor and ensure that the survey does not go beyond the scope as approved by the Collegium CCIT (TDS)/DGIT (Investigation), as the case may be.

(x) TDS or Investigation Wing officer shall prepare the survey report and upload the same on ITBA as per Survey Manual and extent instructions in this regard and will also send a copy of survey report to AO/TRO concerned.