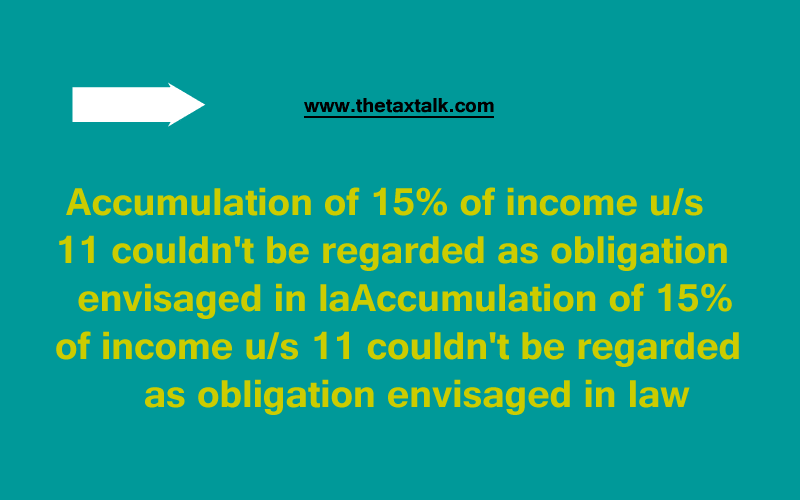 This was the observation in the case of
Gnyan Dham Vapi Charitable Trust v. DCIT – [2020] 120 taxmann.com 281 by Ahmedabad – Trib.
Short overview of the case:
During the assessment proceedings, Assessing Officer (AO) noticed that assessee-trust had claimed carry forward of deficit which was incurred due to its excess spending on objects in a particular year.
AO denied assessee’s claim to carry forward such deficit.
On appeal, CIT(A) allowed carrying forward of such excess expenses.
However, it directed AO to exclude 15% of income from the quantum of deficit observing the same to be not a real deficit but a notional deduction.
On further appeal, ITAT held that to be eligible for claiming exemption, the income of the trust must be applied for charitable objects.
A charitable trust or institution is required to apply at least 85% of income derived from trust property towards the charitable purpose.
If the income spent on said purpose falls short of 85%, such shortfall may be subject to tax in certain circumstances.
Hence, a statutory obligation has been cast on trust to utilize at least 85% of income derived from trust’s property unless accumulated or set apart for application in subsequent years.
Section 11 however grants entitlement to a trust to retain or accumulate 15% of income derived from property held in the trust without any limit and is thus benevolent.
In assessee’s case, the situation was quite opposite. Assessee had utilized its income in excess of its receipts without any accumulation resulting in certain deficits.
CIT(A) had applied the governing principles of section 11(1)(a) to a converse situation of excess spending rather than accumulation and had brought down the entitlement of deficits carry forward.
ITAT further held that the statutory postulations towards the accumulation of 15% of income for an indefinite period is an entitlement or a right of absolute nature vested upon the assessee but cannot be regarded as an obligation envisaged in law.
The law applicable to the accumulation of income cannot be extended to application thereof. Where an assessee had made excess application of its income, the option of entitlement vested upon it to accumulate 15% for an indefinite period couldn’t operate as an obligation enforceable against it.
The method of computation of deficit suggested by CIT(A) was devoid of any logic.
Tags: 15% accumulation for trust not the rightexcess application for trust don't include 15%