When legislature itself has accepted an HUF to be a donee in clause (ii) of the “relatives” definition, gift from HUF is declined: ITAT Ahmedabad 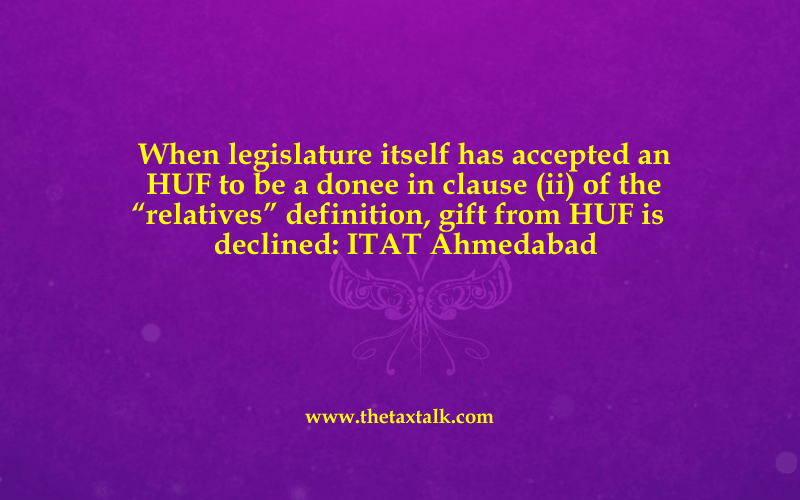 When legislature itself has accepted an HUF to be a donee in clause (ii) of the “relatives” definition, gift from HUF is declined: ITAT Ahmedabad

ITAT, Ahmedabad Tribunal (D) in the case of Gyanchand M. Bardia Vs. Income Tax Officer has made following important observation:

1.   The legislature substituted clause (e) to Explanation in s. 56(2)(vii) defining the term of “relative” to be applicable in case of an individual assessee as well as HUF; with retrospective effect from 01.10.2009.

2.   The assessee is fair enough in not disputing the fact that the former category in clause (i) of (e) defining a “relative” qua an individual recipient does not include an HUF as a donor.

3.   The legislature has incorporated clause (ii) therein to deal with an instance of an HUF donee only receiving gifts from its members.

5.   The legislative intent is very clear that an HUF is not to be taken as a donor in case of an individual recipient. The assessee’s former plea of having received a valid gift from his HUF is therefore declined.

The copy of the judgment of ITAT, Ahmedabad Tribunal (D) in the case of Gyanchand M. Bardia Vs. Income Tax Officer is produced hereunder:

2. We advert to the relevant facts qua assessee’s sole substantive grievance qua the gift in question amounting to Rs.1,02,00,000/- received from HUF added by both the lower authorities u/s.68 of the Act. There is no dispute about the fact that the eponymous HUF in question consists of assessee-karta, his wife Rajkumari and son Rakesh. The assessee has received the sum of Rs.1,02,00,000/- by way of banking channel only. He claimed the said amount to be a gift without consideration covered u/s. 56(2)(vii) of the Act as inserted by the Finance Act, 2009 w.e.f. 01.10.2009. Case records suggest that the Assessing Officer went into a detailed discussion in assessment order dated 11.02.2015 to reject assessee’s claim to be covered u/s.56(2)(vii)(c), 2nd proviso (a) r.w. Explanation (e) thereto defining a “relative” of an individual receipient not including an HUF as a donor. Many judicial precedent came to be quoted from assessee side before the Assessing Officer i.e. Surjit Lal Chhabda vs. CIT (1975) 101 ITR 776 (SC) that an HUF constitutes all persons lineally descended from a common ancestor including their mothers, wives or widows alongwith unmarried daughters. His reliance on co-ordinate bench decision in Vineetkumar Raghavjibhai Bhalodia vs. ITO (2011) 140 TTJ (Rajkot) 58 accepting the similar gift in case of individual from HUF stood rejected as per legislative amendments in the above statutory provision. All this led to the impugned addition being made in assessee’s hands.

3. The CIT(A) confirms Assessing Officer’s action as under:

“7.1 As mentioned in the assessment order, the appellant has shown gift of Rs.1,02,00,000/- from his own HUF i.e. Gyanchand Mulchand Bardia (HUF). The AO stated in the assessment order that HUF cannot give gift to the member of the HUF, therefore, AO assessed the income under the head income from other sources. The appellant contended that as per amended provisions of the Act, the gift given by member of the HUF to the HUF is not taxable income. The appellant relied upon the case law of Vineetkumar Raghavjibhai Bhalodia V/s ITO in ITA No.583 (RJT) 2007 dated 17-05-2011 delivered by the Hon’ble ITAT Bench, Rajkot.

7.3 Further in a gift, there has to be gift deed, one has to be donor and other should be donee. Donee should expressly given consent accepting the gift in the gift deed. There is no such document produced by the appellant.

7.5 As discussed above, the additions made by the AO by rejecting the claim of the appellant and treating income under the head income from other sources is found justified, hence confirmed. This ground of appeal is dismissed.”

4. Learned Authorized Representative vehemently contends that both the lower authorities have erred in law or as well as on facts in rejecting assessee’s gift claim being received from the HUF in question comprising of the three family members only. He quotes hon’ble apex court’s judgment (supra) that the Income Tax Act does not postulate a separate definition of an HUF as the same has to be applied as in Hindu law. Mr. Shah seeks to emphasize that the other two HUF members i.e. assessee/karta’s wife and son (supra) are already covered in “relative” definition clauses ‘A’ and ‘E’ of the Explanation (e) (supra). He states Assessing Officer and the CIT(A) have committed both illegality as well as irregularity in assessing the sum in question u/s.68 of the Act. He files a paper book comprising of assessee’s submissions dated 17.08.2015 filed before the CIT(A), HUF’s bank pass book indicating relevant sum transfer, assesse’s letter dated 10.12.2015 submitted in remand proceedings, HUF’S bank pass book from 13.03.2012 to 23.03.2012, letter dated 10.01.2016 in context of Assessing Officer’s verification, Assessing Officer’s remand report and submissions dated 01.02.2016 against the remand findings alongwith the above case laws as well as other co-ordinate bench’s decisions Harshadbhai Dahyalal Vaidhya (HUF) vs. ITO (2013) 155 TTJ (Ahd) 71, Mumbai co-ordinate bench decision in Shri Hemal D. Shah vs. DCIT dated 08.03.2017 in ITA No.2627/Mum/2015 and DCIT vs. Ateev V. Gala in ITA NO.1906/Mum/2014 dated April 19, 2017. He therefore seeks acceptance of instant appeal.

5. Mr. Shah’s latter contention as per assesse’s pleadings is that both the lower authorities have not decided his alternative submission to be covered u/s.10(2) of the Act. Learned counsel is fair enough in not pressing for assessee’s third substantive ground seeking interest deduction of Rs.5,819/- claimed u/s. 57(iii) of the Act.

7. We have given our thoughtful consideration to rival submissions. Case file perused. The first dispute between the parties is qua validity of assessee’s gift claim as received from the HUF amounting to Rs.1,02,00,000/- coming through banking channel. Both the lower authorities are of the view that an HUF does not come under the specified category of a relative in Section 56(2)(vii) as applicable w.e.f. 01.10.2009. The assessee’s main reliance is on this tribunal’s Rajkot bench decision in Vineetkumar Raghavjibhai Bhalodia vs. ITO (supra) accepting a similar gift claim of individual assessee from HUF. The Revenue has preferred Tax Appeal No. 1326/2011 against the same before the hon’ble jurisdictional high court. The same stood admitted on 23.10.2012 for final adjudication. The fact however remains that much water has flown down the stream since the above co-ordinate bench decision. The assessment year therein is 2005-06. Relevant statutory provision at that point of time was Section 56(2)(v) of the Act. This followed clause (vi) in Section 56(2) increasing the amount of Rs.50,000/- from earlier limit of Rs.25,000/- as applicable upto 01.10.2009. Then came clause (vii) w.e.f. 01.10.2009 specifying the same to be applicable both in case of an individual as well as HUF recipients. The legislature substituted clause (e) to Explanation in Section 56(2)(vii) defining the term of “relative” to be applicable in case of an individual assessee as well as HUF; with retrospective effect from 01.10.2009. The assessee is fair enough in not disputing the fact that the former category in clause (i) of (e) defining a “relative” qua an individual recipient does not include an HUF as a donor. The legislature has incorporated clause (ii) therein to deal with an instance of an HUF donee only receiving gifts from its members. We refer to Board’s circular no. 1/2011 r.w. explanatory circular for Finance Act, 2009, makes it clear in latter’s clause no.24.2 that Section 56(ii) is an anti-abuse provision. We also quote Hon’ble apex cout’s judgment in CIT v. Sodra Devi [1957] 32 ITR 615 (SC), Smt. Tarulata Shyam v. CIT (1977) 108 ITR 345 (SC) and Keshavji Ravji & Co. v. CIT (1990) 183 ITR 1 (SC) to observe that principles of literal interpretation in respect of the relevant context vis-a-vis the legislation intention have to be applied here as there is no ambiguity in definition of a “relative” in respect to an individual donee in the above definition clause. Coupled with this, the legislature itself has accepted an HUF to be a donee in clause (ii) of the “relatives” definition. We apply necessary implication principle to conclude in these facts that the legislative intent is very clear that an HUF is not to be taken as a donor in case of an individual recipient. Learned counsel’s reliance on Surjit Lal Chhabda (supra) is therefore not acceptable in this peculiar legislative backdrop of facts and circumstances. Learned co-ordinate bench (supra) seem to have followed “Bholadia” case law which is no more applicable in view of subsequent legislative developments vide Finance Act, 2012 w.e.f. 01.10.2009 (supra). We thus do not treat the same as finding precedents as per (1993) 202 ITR 222 (AP) CIT vs. B. R. Constructions (FB). The assessee’s former plea of having received a valid gift from his HUF is therefore declined.

8. Learned counsel at this stage refers to assesse’s alternative plea that the CIT(A) has not adjudicated the latter ground that the amount in question is exempt u/s.10(2) of the Act. We find no merit in the instant alternative plea as well since a gift sum which is not allowable under the relevant specific clause cannot be accepted to be an exempt income u/s.10(2) of the Act. We thus treat instant latter plea to be mainly technical in nature devoid of merit.

9. This assessee’s appeal is dismissed.