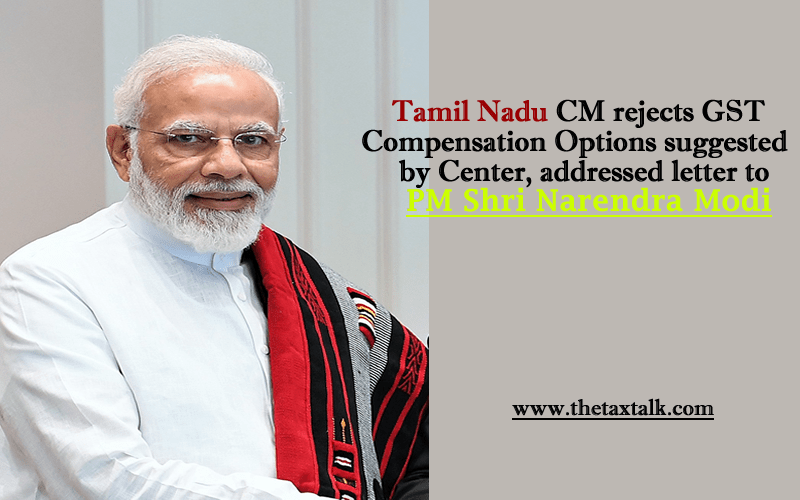 As you are aware one of the most crucial fiscal issues facing the nation currently is the payment of compensation on account of the short fall in revenue post implementation of GST. Most States, and in particular Tamil Nadu, agreed to the implementation of GST and to support the legislation on the basis of the unequivocal commitment given by the Government of India to compensate the States for any revenue loss. Such compensation is clearly assured in the 101st Constitution Amendment Act and in the GST (Compensation to States) Act, 2017.

So far, no compensation has been released for the shortfalls in revenue collection since April 1, 2020. As on date, a total sum of Rs 12,250.50 crores is due to Tamil Nadu as compensation for shortfall in GST collections, of which Rs 11,459.37 crores has accrued from April to July, 2020. As you are aware, the States have suffered a severe loss in revenue in the wake of the COVID 19 pandemic and have also been at the forefront of the battle to prevent the spread of the disease. Considerable additional expenditure of nearly Rs.7,000 crore has already been incurred towards upgrading health facilities, providing medical supplies and towards relief measures for the most affected. For the economy to restart effectively, State Governments also need to ensure that regular budgetary expenditure on on-going schemes and programmers picks up. Hence, State Governments are in immediate need of resources.

I had already requested the Honorable Prime Minister that one-third additional borrowing may be permitted to States over the 2019-20 level and an untied special grant of Rs 1 lakh crore be released to all States as budgetary support, in addition to other specific grants. This support was sought, anticipating shortfall in State tax revenues, but after assuming that the States would receive the entire GST compensation. As part of the Atma Nirbhar Bharat programme, the Government of India, States were permitted an additional borrowing of 2 per cent of GSDP of which 1.5 per cent was permissible based on implementation of certain reform measures identified by the Government of India. This additional borrowing has been fully factored into our fiscal projections for 2020-21 and is essentially required, in addition to the full compensation for GST shortfall.

Our stance has consistently been that the Government of India has a moral and legal obligation to pay the compensation for the shortfall in GST collections. We had also indicated that it was for the Government of India to find the necessary funds to compensate the States, including from the Consolidated Fund of India, if there was a shortfall in the cess collections. As a via media in the 41st GST Council meeting held on 27th August, 2020,, our representative Thiru D.Jayakumar, Hon’ble Minister for Fisheries and Personnel and Administrative Reforms, had suggested that the Government of India could mobilise resources and lend the funds required to the GST Compensation Fund and that loan could be serviced through an extension of the GST Cess for a few years beyond 2021-22. This was a very reasonable and practical suggestion and was agreed to by almost all States.

In this context, I am very concerned about the two options that have been offered to States after the GST Council Meeting held on 27th August, 2020. My first concern is that in both the options suggested by the Government of India, the States are being required to borrow from the market to make good the shortfall in compensation due. This is administratively difficult to implement and more expensive. Further, the reasons being cited for such an arrangement are not persuasive. Whether the Government of India borrows or the State Governments borrow, for rating agencies and others who monitor the macro-economic indicators, it is the overall General Government deficit and borrowing that is relevant. The argument that States borrowing for what is essentially a Government of India obligation is a seemingly better optical arrangement does not appear to be a strong or valid reason. Hence, I reiterate Government of Tamil Nadu’s stance that the Government of India should advance funds to the GST Compensation Cess fund, if need be by borrowing in the market and service the debt by an extension of the compensation cess.

Further, in an effort to reduce the total amount of borrowing in 2020-21, an artificial distinction is being drawn between GST implementation based losses and COVID-induced losses. I am heartened by the clear and explicit statement in the note which has been circulated that under the operative sections of the GST (Compensation to States) Act, 2017, compensation is payable for the entire shortfall in revenue collection, even if it is not on account of GST implementation, and further that this position has been clarified by the Attorney General and is accepted by the Central Government.

It is important that this position is explicitly reiterated in a formal communication to the States.

What causes concern is that after having made such a categorical statement on the payability of the entire shortfall, in Option I, only Rs 97,000 crores, assessed to be the shortfall on account of GST implementation alone which is proposed to be borrowed by the State Governments with a special dispensation from GOI and RBI. For the remainder of the shortfall, which is estimated to be Rs 1.38 lakh crores (Rs 2.35 lakh crores (-) Rs 97,000 crores), States do not get any assurance of receiving funds in 2020-21. They would have to wait for 2-3 years or more, to receive the compensation, out of the cess fund provided GST cess is extended beyond 2021-2022.

In Option II, while the entire Rs 2.35 lakh crores are to be borrowed by the States, the terms of contracting such loans are much less attractive. More importantly, borrowing of upto 1 per cent of the GSDP already permitted under the Atma Nirbhar Bharat Scheme is being withdrawn. This makes Option II an unattractive proposition and appears to be aimed at penalizing States for legitimately urging the Government of India to devise a scheme to compensate the States for the shortfall in the current year itself, as per the provisions of the Act.

The net impact of the Government of India’s proposed two options is to reduce the overall resources available to States in 2020-­21 quite substantially to the extent of about 1 per cent of GDP amounting to nearly Rs.2 Lakh Crore. This will really hurt spending by States on many crucial COVID 19 and non-COVID 19 related expenditure. Welfare programmes and infrastructure creating capital expenditure will suffer greatly. This will impede early resumption of growth momentum in the economy and hurt economic revival.

In these circumstances, I earnestly request the Hon’ble Prime Minister to intervene in this matter, direct the Ministry of Finance to revisit their stance in the matter, and to:

These measures will ensure that not only are States treated justly and fairly in matter of being provided the due compensation for the revenue shortfall post implementation of GST, but will also have adequate funds in 2020-21 to meet their essential expenditure commitments, and can thus effectively contribute to the revival of the economy.