GST: Detention of goods alongwith vehicle, Direction to competent authority for release of goods upon fulfilling the requirement of section 140 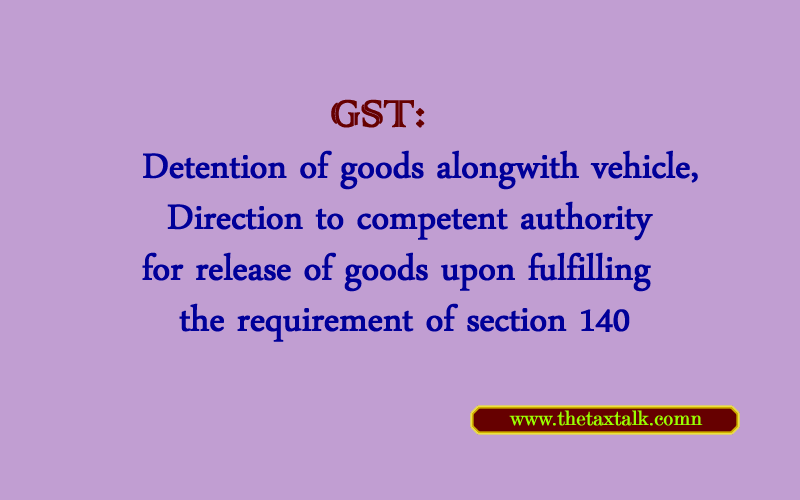 GST: Detention of goods alongwith vehicle, Direction to competent authority for release of goods upon fulfilling the requirement of section 140

IN THE ALLAHABAD HIGH COURT

Learned counsel for the petitioner has submitted that there is a provision under rule 140 of the Central Goods and Services Rules, 2017 empowering the proper officer, which in the present case, is respondent no. 3 to release the seized goods on provisional basis upon execution of a bond for the value of the goods under Form G. S. T. He has next submitted that the petitioner is ready to comply with the requirement of rule 140 together with its explanation and the seized goods along with vehicle be released.

Sri C. B. Tripathi, learned Special Counsel appearing for the respondents has submitted that in case the petitioner complies with the mandatory requirement of rule 140 of the Central Goods and Services Rules, 2017 together with its explanation, he has no objection to the release of the goods.

We have heard learned counsel for the petitioner and gone through the rule 140, which is being extracted hereinbelow together with its explanation :–

“140. Bond and security for release of seized goods–(1) The seized goods may be released on a provisional basis upon execution of a bond for the value of the goods in FORM GST INS-04 and furnishing of a security in the form of a bank guarantee equivalent of applicable tax, interest and penalty payable.

Explanation–For the purpose of the rules under the provisions of this Chapter, the “applicable tax” shall include central tax and State tax or central tax and the Union territory tax, as the case may be and the cess, if any, payable under the Goods and Service Tax (Compensation to States) Act, 2017 (15 of 2017).”

In case the petitioner files an application before the respondent no. 3 within three weeks from today indicating therein that he is ready to comply with the Requirement of rule 140, the respondent no. 3 shall pass appropriate orders thereon within a further period of one week. In case the petitioner fulfils the requirement of rule 140 together with its explanation, he shall release his vehicle along with the goods.