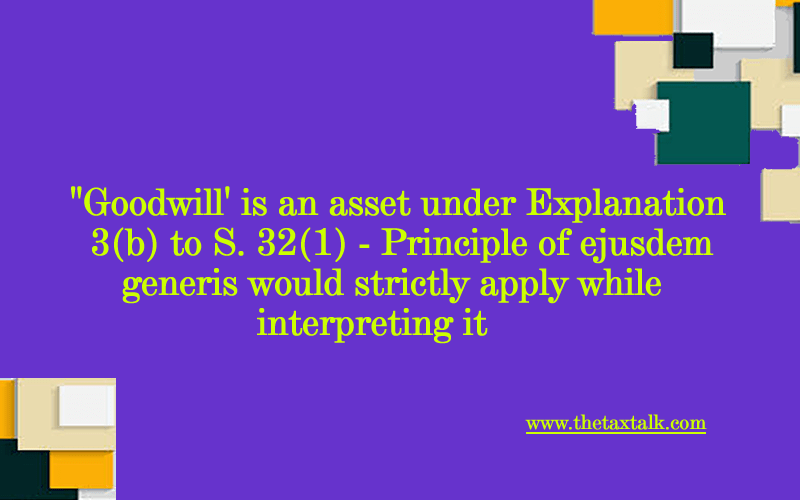 The court in the present case has held that  this question is covered by decision of this Court in case of Techno Shares and Stocks Limited vs. Commissioner of Income Tax, reported in (2010) 327 ITR 323 & settled in favour of assessee. Stock Exchange Membership Cards are assets eligible for depreciation u/s. 32.

None appears for the respondent, though served. Heard learned counsel for the Department. Leave granted.

This civil appeal concerns the Assessment Year 2003-2004. Three questions arise for determination by this Court. They are as follows: Question No.[a]:

“Whether Stock Exchange Membership Cards are assets eligible for depreciation under Section 32 of the Income Tax Act, 1961?

Whether, on the facts and in the circumstances of the case, deletion of Rs.53,84,766/- has been made correctly?”

Learned Additional Solicitor General fairly concedes that the said question is covered by the decision of this Court in the case of Techno Shares and Stocks Limited vs. Commissioner of Income Tax, reported in (2010) 327 ITR 323, in favour of the assessee.

“Whether goodwill is an asset within the meaning of Section 32 of the Income Tax Act, 1961, and whether depreciation on ‘goodwill’ is allowable under the said Section?”

In the present case, the assessee had claimed deduction of Rs.54,85,430/- as depreciation on goodwill. In the course of hearing, the explanation regarding origin of such goodwill was given as under:

It was further explained that excess consideration paid by the assessee over the value of net assets acquired of YSN Shares and Securities Private Limited [Amalgamating Company] should be considered as goodwill arising on amalgamation. It was claimed that the extra consideration was paid towards the reputation which the Amalgamating Company was enjoying in order to retain its existing clientele.

The Assessing Officer held that goodwill was not an asset falling under Explanation 3 to Section 32(1) of the Income Tax Act, 1961 [‘Act’, for short].

We quote hereinbelow Explanation 3 to Section 32(1) of the Act: “Explanation 3.– For the purposes of this sub-section, the expressions “assets’ and “block of assets’ shall mean–

[a] tangible assets, being buildings, machinery, plant or furniture;

[b] intangible assets, being know-how, patents, copyrights, trademarks, licences, franchises or any other business or commercial rights of similar nature.”

In the circumstances, we are of the view that “Goodwill’ is an asset under Explanation 3(b) to Section 32(1) of the Act.

One more aspect needs to be highlighted. In the present case, the

Assessing Officer, as a matter of fact, came to the conclusion that no amount was actually paid on account of goodwill. This is a factual finding. The Commissioner of Income Tax (Appeals) [“CIT(A)’, for short] has come to the conclusion that the authorised representatives had filed copies of the Orders of the High Court ordering amalgamation of the above two Companies; that the assets and liabilities of M/s. YSN Shares and Securities Private Limited were transferred to the assessee for a consideration; that the difference between the cost of an asset and the amount paid constituted goodwill and that the assessee-Company in the process of amalgamation had acquired a capital right in the form of goodwill because of which the market worth of the assessee-Company stood increased. This finding has also been upheld by Income Tax Appellate Tribunal [‘ITAT’, for short]. We see no reason to interfere with the factual finding.

One more aspect which needs to be mentioned is that, against the decision of ITAT, the Revenue had preferred an appeal to the High Court in which it had raised only the question as to whether goodwill is an asset under Section 32 of the Act. In the circumstances, before the High Court, the Revenue did not file an appeal on the finding of fact referred to hereinabove.

The last question raised in this civil appeal is regarding cancellation of disallowance of an amount of Rs.83,02,976/- as a bad debt.

For the afore-stated reasons, we answer all the three questions in favour of the assessee and against the Revenue.

The civil appeal filed by the Department stands dismissed with no order as to costs.