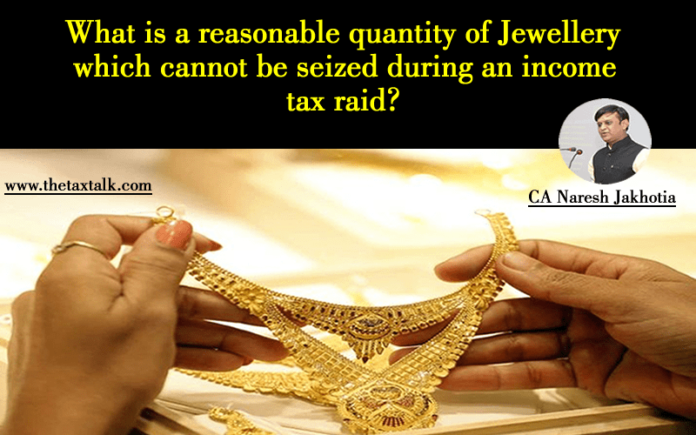 Seizure of jewellery is one of the most common facts during income tax raids. However, there is a CBDT circular which gives immunity from seizure for reasonable quantities of jewellery. Now, what is reasonable is issues which differs from person to person. CBDT has issued Instruction No. 1994 dated 11-05-1994 regarding this which is produced hereunder:

Instances of seizure of jewellery of small quantity in the course of operation under section 132 have come to the notice of the Board.

The question of a common approach to situation where search parties come across items of jewellery has been examined by the Board and following guidelines are issued for strict compliance.

(i) In the case of a wealth-tax assessee, gold jewellery and ornaments found in excess of the gross weight declared in the wealth-tax return only need to be seized.

(ii) In the case of a person not assessed to wealth-tax gold jewellery and ornaments to the extent of 500 gms. per married lady 250 gms per unmarried lady and 100 gms. per male member of the family, need not be seized.

(iii) The authorized officer may having regard to the status of the family and the customs and practices of the community to which the family belongs and other circumstances of the case, decide to exclude a larger quantity of jewellery and ornaments from seizure.

This should be reported to the Director of Income-tax/Commissioner authorising the search all the time of furnishing the search report.

(iv) In all cases, a detailed inventory of the jewellery and ornaments found must be prepared to be used for assessment purpose

Apart from above, the courts have also expressed the power of seizure and have held that the reasonable extent of gold cannot be seized.

Here is one interesting case by Delhi High Court wherein  AO found Gold jewellery weighing 906 gms and treated  400 gms as “reasonable allowance”. He made addition in respect of balance 506 gms.  Court held that addition made is totally arbitrary and is not founded on any cogent basis or evidence. One has to keep in mind that the assessee was married for more than 25-30 years. The jewellery in question is not very substantial. The counsel for the appellant/assessee is correct in her submission that it is a normal custom for women to receive jewellery in the form of “stree dhan” or on other occasions such as birth of a child etc. Collecting jewellery of 906.900 grams by a woman in a married life of 25-30 years is not abnormal. Furthermore, there was no valid and/or proper yardstick adopted by the AO to treat only 400 grams as “reasonable allowance” and treat the other as “unexplained”. Matter would have been different if the quantum and value of the jewellery found was substantial. The findings of the Tribunal are totally perverse and far from the realities of life

It concluded that assessee being married for the last 25-30 years. gold jewellery weighing 906 gms. found during search could not be said to be substantial and the same having been claimed to be ‘shri Dhan’ of assessee’s wife no addition under s. 69A was called for.

Here is the copy of complete judgment:

Shashi M. Kapila with R.R. Maurya, for the Appellant : Kiran Babu, for the Respondent

Admit on the following substantial questions of law :

“(i) Whether the order of the learned Tribunal is perverse in holding that the entire jewellery found during the search belonged to the appellant and not his wife and was undisclosed income of asst. yr. 2006-07 without any evidence ?

(ii) Whether the learned Tribunal erred in wrongly upholding the addition of the entire 506.9 grams of jewellery pertained to asst. yr. 1996-97 without appreciating that the said jewellery was acquired at the time of marriage over a period of time ?”

Filing of paper books is dispensed with as the learned counsel for the parties are prepared to finally argue the matter. We have heard arguments of both the parties at length and now proceed to answer the questions formulated above. Before that, however, it would be necessary to take note of the relevant facts.

On 21st July, 2006, the assessee filed his return of income for the asst. yr. 2006 under s. 139 of the Act. In order to proceed with this assessment year detailed questionnaire was also issued which related to queries in connection with the seized material. This questionnaire was duly replied by the appellant who submitted supporting evidence as well. Thereafter, assessment order was framed by the AO assessing the income at Rs. 2,64,02,210 making several additions under s. 69 of the Act. This assessment was made under s. 143(3) and under s. 153A of the Act in respect of asst. yr. 2000-01 to asst. yr. 2006-07. The assessee approached the CIT(A) by way of appeal against all the additions made by the AO. The CIT(A) disposed of the appeals by consolidated order in respect of all these assessment years and deleted all the additions except two namely addition of Rs. 3,87,364 on account of jewellery found during the search and Rs. 50,000 on account of receipt of booking at Tivoli Garden. Both, the assessee as well as the Revenue challenged the orders of the CIT(A) by filing their respective appeals. In these appeals the two additions sustained by the CIT(A) are affirmed by the Tribunal as well. In this appeal preferred by the assessee against the impugned orders dt. 17th Sept., 2010, we are concerned with these two additions only. It may also be mentioned that at the time of arguments the learned counsel for the appellant did not press about the addition of Rs. 50,000 on account of receipt of Rs. 50,000 at Tivoli Garden. For this reason, the questions of law which are formulated pertain to addition of Rs. 3,87,364 on account of jewellery.

As far as addition qua jewellery is concerned, during the course of search, jewellery weighing 906.900 grams of the value amounting to Rs. 6,93,582 was found. The appellant’s explanation was that he was married about 25 years back and the jewellery comprised “stree dhan” of Smt. Jyoti Chadha, his wife and other small items of jewellery subsequently purchased and accumulated over the years. However, the AO did not accept the above explanation on the ground that documentary evidence regarding family status and their financial position was not furnished by the appellant. The AO accepted 400 grams of jewellery as explained and treated jewellery amounting to 506.900 grams as unexplained and made an ad hoc addition of Rs. 3,87,364 under s. 69A of the Act working on unexplained jewellery, by applying average rate of the total jewellery found. The relevant portion of the assessment order reads as follows :

The CIT(A) confirmed this addition stating that the AO had been fair in accepting the part of jewellery as unexplained. The Tribunal has also endorsed the aforesaid view. Learned counsel for appellant Ms. Kapila submitted that there was no basis for the AO to accept the ownership of the gold jewellery to the extent of 400 grams only as “reasonable allowance” and treat the remaining jewellery of 506.900 gms. as unexplained. She also submitted that another glaring fact ignored by the AO as well as other authorities was that as the Department had conducted a search of all the financial dealings which were within his knowledge and no paper or document was found to indicate that this jewellery belonged to the appellant and that it was undisclosed income of the asst. yr. 2006-07. In a search operation, no scope is left with the tax department to make addition on subjective guess work, conjectures and surmises. It was also argued that jewellery is “stree dhan” of the assessee’s wife, evidenced in the form of declaration which was furnished by mother-in-law of the assessee stating that she had given the jewellery in question to her daughter. She argued that it is a normal custom for a woman to receive jewellery in the form of marriage and other occasions such as birth of a child. The assessee had been married more than 25-30 years and acquisition of the jewellery of 906.900 grams could not be treated as excessive.