Sec. 115BBE couldn’t be applied through rectification if no sec. 69 additions were made during assessment 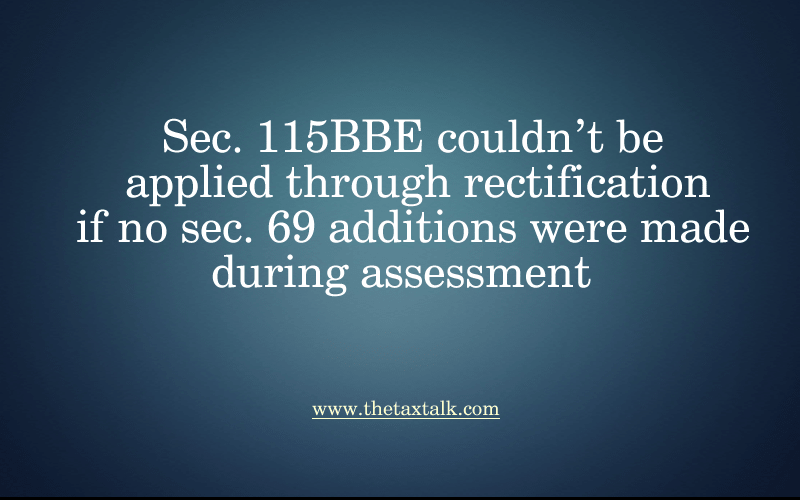 Sec. 115BBE couldn’t be applied through rectification if no sec. 69 additions were made during assessment

ACIT v. Sudesh Kumar Gupta – [2020] 117 taxmann.com 178 (Jaipur – Trib.)
A search was conducted at business premises of the assessee. During the survey proceedings, assessee surrendered undisclosed investment in stock from undisclosed income.
Thereafter, surrendered income was offered and reflected in return of income filed by assessee.
Subsequently, matter was taken up for scrutiny and assessment order was passed under section 143(3) accepting the income returned by assessee.
A notice under section 154 was issued for charging tax on surrendered income at the rate of 30% in accordance with provisions of section 115BBE.
Assessee submitted that the excess stock was admitted on estimated basis and same was offer to tax in return of income which was accepted by Assessing Officer (AO).
He further submitted that excess stock offered in survey was a part of business income and without any corroborative evidence, such stock was determined by valuing the business stock at current price instead of purchase price.
Nothing was brought to suggest that the declared stock was not a regular item of stock dealt with by the assessee.
Submission of assessee was not accepted by AO. On appeal, CIT(A) set aside the rectification order.
On revenue’s appeal, ITAT held that return of income filed by assessee had been accepted by AO without making any adjustments.
There was nothing on record to show that AO had called for any explanation from assessee regarding nature and source of investment and formation of opinion and recording of satisfaction by AO which was required before invoking section 69.
Where the provision of section 69 had not been invoked while passing assessment order, section 115BBE which were contingent on satisfaction of requirement of section 69 could not be independently applied by invoking provisions of section 154.