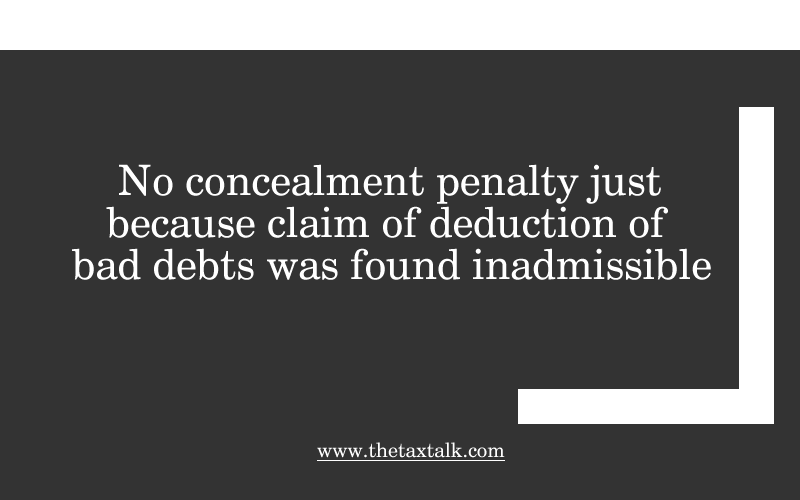 Ventura Textiles Ltd. v. CIT – [2020] 117 taxmann.com 182 (Bombay)
During the assessment proceedings, it was found that assessee had debited selling and distribution expenses and same was claimed as bad debt in the books of account.
Deduction was claimed under section 36(1)(vii).
Subsequently, it was found that said sum was paid as compensation for supply of inferior quality of goods.
Assessing Officer (AO) disallowed deduction claimed by assessee by holding that the amount claimed as bad debt was not debt.
AO further held that said sum was also not deductible under section 37(1) as the compensation paid was not wholly and exclusively for business purpose but extraneous consideration.
By taking the view that assessee had furnished inaccurate particulars of income, AO ordered that penalty proceedings under section 271(1)(c) was to be initiated separately.
On appeal, Bombay High Court held that in case CIT v. Reliance Petroproducts (P.) Ltd [2010] 189 Taxman 322 (SC), the supreme court held that mere making of a claim which is not sustainable in law by itself would not amount to furnishing inaccurate particulars regarding the income of the assessee.
Therefore, such claim made in the return cannot amount to furnishing inaccurate particulars of income.
Thus, the Bombay HC held that it was quite evident that the assessee had declared full facts before AO while passing assessment order.
It was another matter that the claim was based on the facts which were found to be inadmissible, but it was not same as furnishing inaccurate particulars of income as contemplated under section 271(1)(c).
Therefore penalty order was to be set aside.