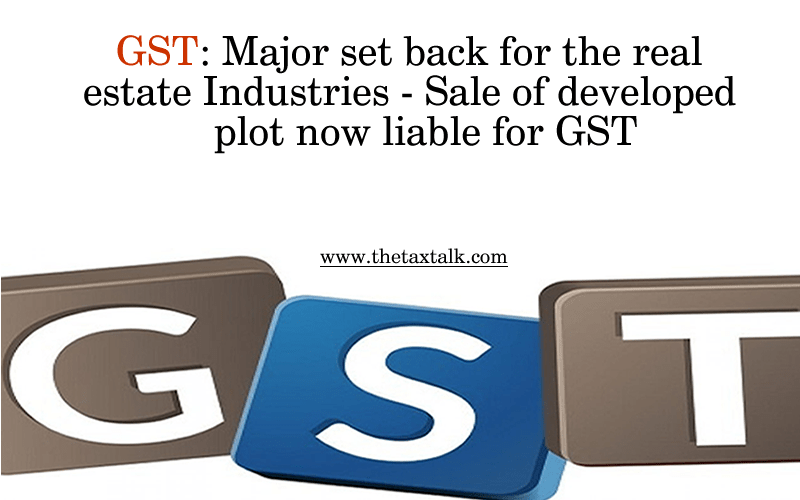 “GST is applicable on sale of plot of land if the seller is providing primary amenities such as drainage, water and electricity lines and land levelling etc as per the requirement of the development authorities such as a Jila Panchayat”.

Gujarat AAR held that the activity of the sale of ‘developed’ plots would be covered under the clause ‘construction of a complex intended for sale to a buyer’.

If further observed that the sale of developed plot is covered under ‘construction services’ and GST should be payable on sale of such plots.

Majority of the people believe that present ruling is not in line with the tax position taken under current tax laws vis a vis erstwhile tax laws and is sure to lead to ambiguities in the real estate industry.

Present ruling is issued in a case wherein owner of the land had developed the basic infrastructure and amenities like drainage, water and electricity lines and then sold the ‘developed’ land as plot. According to the advance ruling authority, the sale of developed plots is a scheme which involves forming the land into layout after obtaining necessary plan approval from the development authority, collecting all other required permissions, and completing the layout comprising individual sites. Besides, such plots are developed after levelling of land, construction of boundary wall and roads, laying of underground cables, water pipelines and sewerage lines apart from other developments such as landscaped gardens, drainage system, water harvesting system, demarcation of individual plots and construction of overhead tanks, etc. AAR categorically noted that the seller of such plots charges the rates on super built-up basis and not as per the actual measure of the plot. The super built-up area includes the area used for common amenities, roads, water tank and other infrastructure on a proportionate basis. AAR concluded that in effect the seller is collecting charges towards the land as well as the common amenities, roads, water tank and other infrastructure on a proportionate basis. In other words, these are an intrinsic part of the plot allotted to the buyer

Key observation were as under: