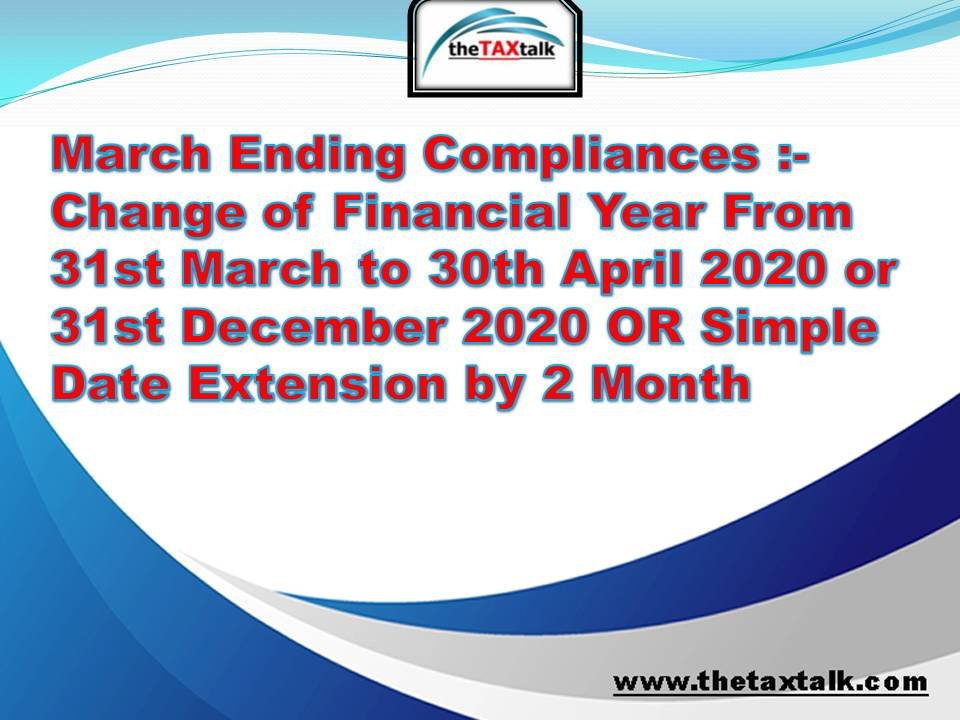 There are various compliance which are falling due on 31st March 2020. Due to corono-virus spread over, there s a life danger and resultantly there is a lock down in various districts of the country. Even where there is no lock down, the offices are closed voluntarily to provide safety and to control its spread over.

At this critical hour, there is also a concern in the mind of the taxpayer, tax professionals and tax collectors about the probable course of action. The Income Tax Officers Association  appealed for extending the financial year closure date from 31st March 2020 to 30th April 2020. The association has appealed that in view of the corona virus and the consequences attached thereto, the closure date of the financial year be extended from 31st March 2020 to 30th April 2020.

However, the real limitations is there from fiscal deficit perspective & time barring provision under the relevant fiscal laws. There is already a shortfall in the revenue collections and the fiscal deficit is already going to present a disappointing figure. The decision on any of the three points above would definitely mean a compromise in the collection figure. First Government need to decide whether it is ready to compromise the revenue collection target. If Government agrees for this, the decision would be easy and the Tax Officials could get a relief.
Under this situation, the operation of Vivad Se Vishwas Scheme 2020 which is recently launched by the Government would also be extended. The scheme is launched with an aim of revenue collection before 31st March 2020. Once the revenue collection target are relaxed, all the schemes and compliance could be easily relieved.
Assuming that the revenue collection targets are relaxed (which by all probability has to be relaxed) the choice of relief on above three points could be as under:
In any case, the options need to be exercised form direct tax perspective but also from indirect tax perspective. There are various dates under GST Act also which also need relief from compliances.
It is appealed to the Hon’ble Finance Minister to take an urgent call to reduce the pain of the tax administration and tax payers. The delay in the decisions will only hamper and put the life of all in trouble. Let us hope something earlier.