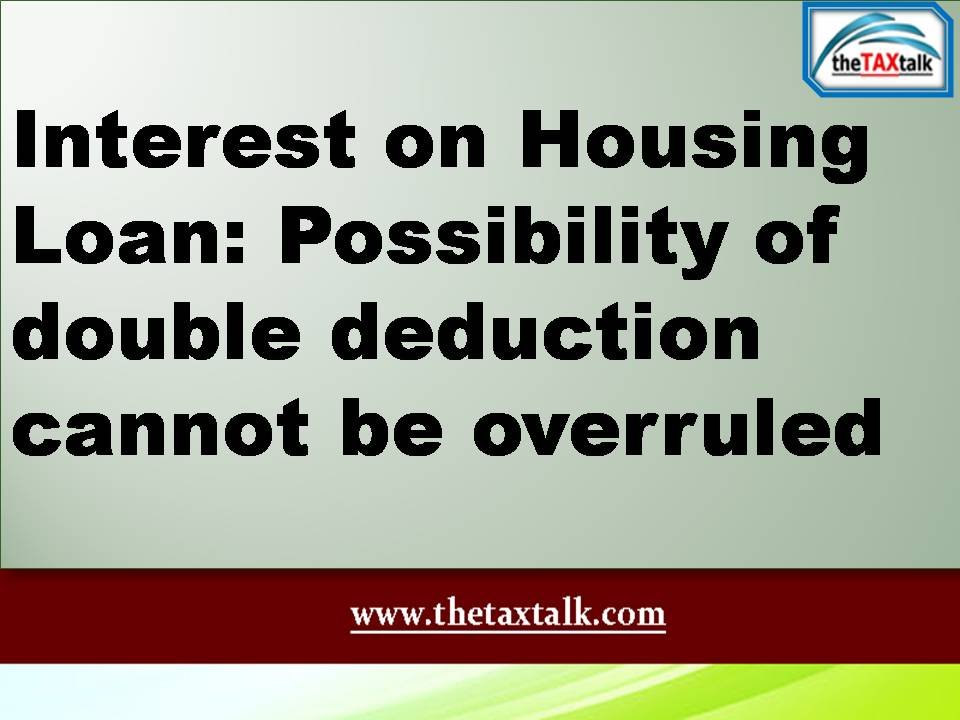 There are often various issues & decisions which makes Income Tax Act an interesting subject to read and analyze.

Let me try to elaborate few such issues in the coming days. One such issue is with regard to interest on housing loan.

Whether interest will be eligible for deduction again when the property is sold by the taxpayers who have already claimed it as deduction u/s 24(b)? The majority opinion would be a big No.

Such dual benefit was upheld by the Tribunal by Chennai Tribunal in the case of ACIT V C Ramabrahmam (2012) 27 taxmann.com 104 (Chennai – Trib.) has allowed deduction towards interest on housing loan under section 48 as cost of acquisition while computing capital gains from sale of such house property. The same interest amount was already claimed as a deduction under section 24(b) while computing income from house property by the taxpayers. This article attempts to give a broad overview of the case and some consequences that could emerge out of this judgment.

In this case, the assessee had purchased a house property in the year 2002-03 & was in the AY 2007-08. While computing capital gains on sale of such house property, assessee claimed deduction under section 48 in respect of the ‘interest on housing loan’ taken for purchase of this house.

It was contended by the Revenue authorities that allowing such claim under both the provisions of section 24(b) and 48 would tantamount to “double deduction”.

During the course of appeal, the Tribunal allowed the claim for deduction in respect of housing loan interest under both the section.

The tribunal concluded that:

IN THE ITAT CHENNAI BENCH ‘C’

“(b) where the property has been acquired, constructed, repaired, renewed or reconstructed with borrowed capital, the amount of any interest payable on such capital:”

There is no quarrel that since the assessee’s claim of deduction was under the statutory provisions; therefore, he succeeded in getting the same. However, after the property was sold, he also chose to include the interest amount while computing capital gains under section 48 of the “Act”, which reads as under:

“48. The income chargeable under the head “Capital gains” shall be computed, by deducting from the full value of the consideration received or accruing as a result of the transfer of the capital asset the following amounts, namely :—

(i)  expenditure incurred wholly and exclusively in connection with such transfer;

After perusing the above said provisions, we are of the opinion that deduction under section 24(b) and computation of capital gains under section 48 of the “Act” are altogether covered by different heads of income i.e., income from ‘house property’ and ‘capital gains’. Further, a perusal of both the provisions makes it unambiguous that none of them excludes operative of the other. In other words, a deduction under section 24(b) is claimed when concerned assessee declares income from ‘house property’, whereas, the cost of the same asset is taken into consideration when it is sold and capital gains are computed under section 48. We do not have even a slightest doubt that the interest in question is indeed an expenditure in acquiring the asset. Since both provisions are altogether different, the assessee in the instant case is certainly entitled to include the interest amount at the time of computing capital gains under section 48 of the “Act”. Therefore, the CIT(A) has rightly accepted the assessee’s contention and deleted the addition made by the Assessing officer. Hence, qua this ground, we uphold the order of the CIT(A). www.TheTaxTalk.com