Whether 20% tax payment is compulsory for stay of demand under the Income Tax Act – 1961? 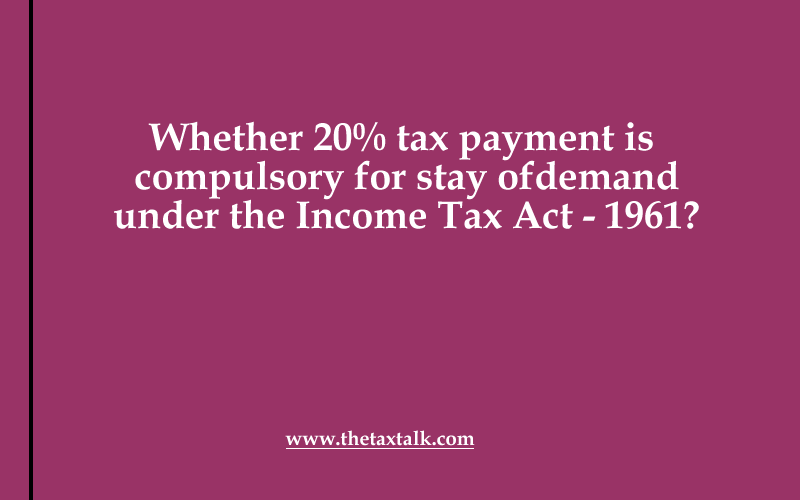 Whether 20% tax payment is compulsory for stay of demand under the Income Tax Act – 1961?

Income-tax department is very ridiculously making additions in the assessments which is resulting in heavy demand on the taxpayers. After demand, rigourous recovery action is taken which starts from bank account attachment. Recovery action is taken even if the appeal is filed or pending before the higher authorities.

For recovery of the taxes, department took rigid measures even if the taxpayers is already facing financial crunch. Though there are number of judgments asking assessing officer to be judicious in the approach, still coercive measure are undertaken. The time ahs come when the strong measures are needed to ensure that the stay applications are not rejected without considering the facts of the case.

Against application filed for stay of demand in terms of section 220(6) of the Act, Assessing Officers either rejects the application or ask to make payment of 20% of the demand in line with CBDT circular Dated 31.07.2017.

Its not only that coercive measures are being taken against the company but now provisions of section 179(1) of the Act are also invoked and the bank accounts and assets of the directors are also attached. It is happening despite the fact that this section specifically requires that action can be taken against the director only if recovery cannot be made from the company and there is gross negligence, misfeasance or breach of duty of the director.

Even prosecution notices u/s 276C(2) of the Act are being issued with authorization from Commissioner or Pr. Commissioner for prosecution on the premise that taxpayer is willfully attempting  to evade payment of tax.

It must be noted here that Hon’ble Apex Court in ITO v. MK Mohammad Kunhi (1969) 71 ITR 815 (SC) has concluded that CIT(A) is empowered  to stay the demand during the pendency of appeal. Still,  CIT(A)s are not exercising  their powers to stay the demand & even often threaten to dismiss the appeal in case assessee filed stay application. CIT(A)s are reluctant  to grant stay even in case the ground of appeal are strong.

In short, taxpayers faces serious problem in getting the stay of deamand.

IF anyhow the appeal is decided by CIT(A) in favour of the revenue, Tax Recovery Officer or Assessing Officer becomes all the more aggressive for recovery without even waiting for the period available to the assesses for filing the appeal before ITAT.  Needless to say, in ITAT whenever request is made for stay of demand, DR strongly resist for the stay.

An Important point here to be noted is that by grating stay, department never losses anything as the demand is always subject to interest @ 12% as against 6% payable on income tax refund.

CBDT has provided that during pendency of appeal before CIT(A), the Assessing Officer shall grant stay of demand till disposal of first appeal on payment of 20% of disputed demand.

The Assessing Officer was also given discretion to direct for payment of higher or lower amount in deserving cases with the approval of Pr. Commissioner / Commissioner.

Let us have a look at some of the judgment on the issue.

“13. In the light the above, I am inclined to set aside the impugned order dated 11.10.2018, as being mechanical and passed without application of mind. Equally mechanical is the stay petition filed by the assessee, which simply relies upon the circulars  issued without reference to the existence of a prima facie case, financial stringency and balance of convenience.”

Hon’ble Court held as under:-

7. This Court is of the opinion that the AO had to necessarily apply his/her mind to the application for stay of demand and pass appropriate orders having regard to the extant directions and circulars including the memorandum of 29.02.2016. This in turn meant that AO could not have imposed a precondition of the kind that has been done in the impugned order. Consequently, the impugned order is hereby set aside. The AO shall consider the application for stay of demand made by the AO in its letter dated 04.05.2018 and pass necessary and appropriate orders, and exercise his discretion having regard to the facts and circumstances of the case, within three weeks from today.”

8. For the above reasons, the impugned order is set aside and a direction is issued that the Petitioner’s application will once again be heard by the PCIT on merits and without reference to the OM dated 31st July, 2017, which, on the face of it, appears to curtail his discretion. The PCIT will dispose of the application with a reasoned order not later than two weeks from the date of receipt of this order.

9. The CIT(A) shall also consider the request of the Petitioner for an expeditious disposal of the appeal.”

“Having heard Shri Vikramjit Banerjee, learned ASG appearing on behalf of the appellant, and giving credence to the fact that he has argued before us that the administrative Circular will not operate as a fetter on the Commissioner since it is a quasi judicial authority, we only need to clarify that in all cases like the present, it will be open to the authorities, on the facts of individual cases, to grant deposit orders of a lesser amount than 20%, pending appeal.”

“Before parting we may observe herein that off late, we have experienced a flood of such writ petitions, where the petitioner having filed appeal along with the stay application before the authority concerned have waited for some time but the appellate authority has failed to pass any order whatsoever on the stay application and in the meantime the assessing authority had proceeded to make recovery which causes in filing of a number of writ petitions before this Court. This can be avoided by the authorities concerned showing more concern to their duties and by disposing of such stay applications expeditiously and in any case within a reasonable time. For inaction of the authorities, this Court is being flooded with avoidable litigation which is causing more harm to public at large who is awaiting for dispensation of justice within a reasonable time from the highest Constitutional Court in the State.”

“The tendency of making high pitched assessments by the Assessing Officers is not unknown and it may result in serious prejudice to the assessee and miscarriage of justice & sometimes may even result into insolvency or closure of the business if such power was to be exercised only in a pro revenue manner. It may be like execution of death sentence, whereas the accused may get even acquittal from higher appellate forums or courts. Therefore, this Court is of the opinion that such powers under sub-Section (6) of Section 220 of the Act also have to be exercised in accordance with the letter and spirit of Instruction No. 95 dated 21.08.1969, which even now holds the field and its spirit survives in all subsequent CBDT Circulars quoted above, and undoubtedly the same is binding on all the assessing authorities created under the Act.”

“In exercising his power, the Income-tax Officer should not act as a mere tax gatherer but as a quasi-judicial authority vested with the power of mitigating hardships to the assessee.” Further, the Hon’ble Court also observed that “Administrative directions for fulfilling recovery targets for the collection of revenue should not be at the expense of foreclosing remedies which are available to assesses for challenging the correctness of a demand. The sanctity of the rule of law must be preserved. The remedies which are legitimately open in law to an assessee to challenge a demand cannot be allowed to be foreclosed by a hasty recourse to coercive powers. Assessing officers and appellate authorities perform quasi-judicial functions under the Act. Applications for stay require judicial consideration. Rejecting such applications without hearing the assessee, considering submissions and indicating at least brief reasons is impermissible.”

Though there are number of judgments asking assessing officer to be judicious in the approach, still coercive measure are undertaken. The payment of 20% tax is optional and not compulsory as has been held in number of cases referred above, still AO rejects the application in genuine cases as well.  The time has come when the strong measures are needed to ensure that the stay applications are not rejected without considering the facts of the case.